Home NEWS No, the dry water sticks in this video of a Covid-19 test...
Facebook
Twitter
WhatsApp
Linkedin
LINE 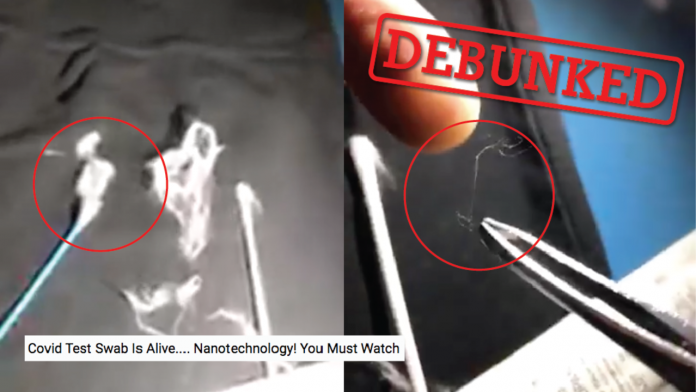 A video in which a woman rolls up the fiber from several dry water peaks from Covid-19 and claims that the material is “alive” and made of “Morgellons”, a filament in connection with an unproven medical condition, has received tens of thousands of views on both Facebook and YouTube since the beginning of January. These claims are false – the synthetic fiber from the dry water sticks is not “alive” and has no connection to Morgellon’s disease.

“Nanoparticles”, “morning lones” … what are the statements made in this video?

A Facebook video published on January 6 falsely claims that Covid-19 dry water sticks are made of living nanoparticles.

Originally posted on Facebook on January 6 from the account of a user who, according to her profile, lives in the US state of Michigan, the livestreamed video shows the user’s sister with a package of CLASSIQSwabs dry water sticks (a product line developed by Copan Diagnostics) as she says is a Covid test from a friend. Do you see what the Covid test says? Tips wrapped with traditional fiber. Well, this fiber here is the same fiber that comes out of my body. These are nanoparticles, the woman says.

Zoom in on the dry water sticks and compare the Covid stick, which has a “silver color”, with a regular cotton stick that is white. “These are the same particles that come out of my body. These are nanoparticles. These particles live and they move. “Later in the video, she uses tweezers to take a fiber from the Covid stick, which seems to move and cling to another wild fiber. “Look at those who get angry. […] We do not even breathe on it and it moves. “She grabs the fibers from the cotton swab and says, ‘Ordinary cotton does not do a damn thing – it does not strike, it does not move.’

“They put nanoparticles directly in your head,” she claims. “I actually know it for this material, these fibers, these silver fibers here, they come out of my body. They are called Morgellons. ”

Why this statement is false

First, the fibers shown in the video are not nanoparticles, which are defined as microscopic particles measuring between 1 and 100 nanometers that cannot be detected by the human eye. The fiber looks silver compared to the cotton swab because CLASSIQSwab’s traditional fiber swab product is made with synthetic fibers (polyester and rayon), both of which have a higher gloss than cotton. According to the recommendations of the Centers for Disease Control and Prevention, a US federal health authority, only synthetic fiber cotton swabs should be used in Covid-19 tests to prevent inhibition of molecular tests.

Why do the fibers seem to move in the video? Apart from environmental factors (breath, wind), electrostatic forces can cause the fibers to stick to each other and other materials, confirms the Institute of Physics. Research also shows that polyester shows higher levels of static charge compared to natural fibers such as silk, Reuters reported. Static charge does not mean that a material is “alive”, and there is no other evidence to support this claim in the video.

What is Morgellon’s disease, the unproven medical condition referred to in the video?

When the woman says that “the silver fibers come out [her] body “, she refers to Morgellons, an unproven skin disease. According to Dr. Flora Teoh, a science editor at Health Feedback, a non-profit organization that actually controls scientific and health-related content, Morgellons disease is” controversial and poorly understood “.

People affected by Morgellons describe filaments or fibers growing from the skin (which they try to pick out and cause sores), as well as a biting or creeping sensation under the skin.

But scientific studies have not been able to find an exact cause of the condition. A study led by researchers at the US Centers for Disease Control and Prevention found no evidence of parasites or mycobacteria in cases in patients with cases. The study also found that the filaments or fibers on the patient’s skin mostly consist of cellulose, most likely from cotton. Studies do not support patients’ belief that the fibers come out of their bodies.

The term “Morgellons” was first used in 1674 by the English physician Sir Thomas Browne to describe a child who had hair breakage of hair-like profiles from the back. After more than three centuries, it was resurrected in 2001 by an American whose son suffered from the feeling of “bugs” and which, after examination with a toy microscope, she found covered with strange fibers. In a 2011 study of the condition, The Guardian described Morgellons as “a unique delusion of parasitosis” whose “imagined symptoms can spread much further online.”

In fact, there is no evidence to support the claim that synthetic dry stick fibers are “living nanoparticles” that Covid-19 testers put in human heads. Claims that stick fibers are made from the same material as the fibers that suffer from Morgellon’s disease say grow out of the skin are also unfounded.

Another in a series of Covid-19 conspiracy theories

This dry-water video is just one in a series of Covid-19 conspiracy theories claiming that coronavirus tests and vaccines are ineffective and even dangerous. Jowharobservers unveiled a video of apple cider vinegar presumably testing positive for the coronavirus, leading Internet users to conclude that antigen tests were unreliable.

Other conspiracies falsely claim that global elites fabricated the Covid-19 pandemic to carry out a police state and plan to insert microchips into vaccines to track and monitor people around the world. According to others, these vaccines would also connect people to the Internet or change their DNA. All of these theories have been thoroughly stripped down by reputable fact-checking organizations (click on the links to read more).