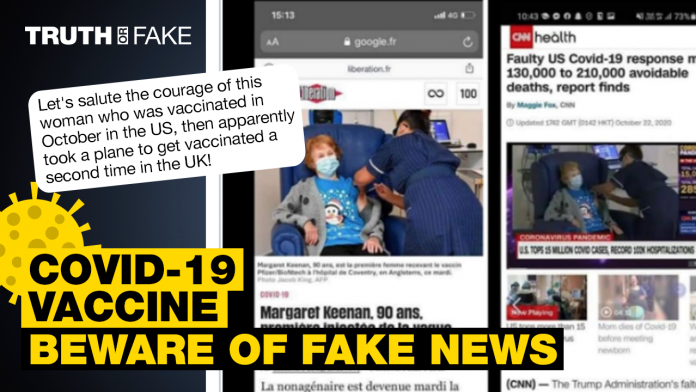 Social media is filled with fake news about the Covid-19 vaccine just days after several countries started their vaccination campaigns. Many people are worried about possible nasty side effects of the vaccine, while others accuse the media of lying about it. In this series, the JowharObservers team takes four of the most widespread rumors. In this article, we look at the (false) rumor that a woman accidentally received a double dose of the vaccine.

On December 8, the UK rolled out the Covid-19 vaccine manufactured by the American pharmaceutical company Pfizer and its German partner BioNTech. This was followed shortly by the United States and Canada, which began distributing the vaccine on 14 December. Bahrain and Mexico have also approved the Pfizer BioNTech vaccine.

2 – Was this woman vaccinated twice by mistake? No.

Some of the fake information circulating online is about Margaret Keenan, the first person to receive the Pfizer BioNTech vaccine in the UK. The photos and videos from Keenan who was vaccinated at a hospital in Coventry, UK were published around the world. Rumors began to spread rapidly among some online circles that Keenan had already been vaccinated in the United States in October.

The evidence from these suspected social media users was a screenshot of a CNN article dated October 22 showing the video of Keenan in the hospital receiving her vaccination. These social media users shared that screen with one from an article published in the French daily Libération on December 8, entitled: “Margaret Keenan, 90, the first person to be vaccinated during the British vaccination campaign.”

This tweet was published on December 10 with the caption in French: “Let’s applaud the courage of this woman who was vaccinated for the first time in October in the United States and who then apparently took a plan to be vaccinated again in the UK in December. We take you for idiots , you have no idea !! #WeAreTheNewsNow “© DR

The two screen grabs are really real. As the 20-minute reporters showed, the October 22 CNN article is about how the Trump administration has handled the Covid-19 crisis. If the video with Keenan appears at the top of the page, it’s because the site contains a dynamic rotating carousel with the latest videos published by CNN. Thus, if anyone watched the article from October 22 today, a video from this week would appear on that site – not the videos from back in October.

For example – we opened the same article from October 22 on December 14 and a video from December 13 was the first to appear.

This screenshot was taken from CNN on December 14th. © DR

The videos suggested by CNN do not match the date of the article. Margaret Keenan was actually vaccinated on December 8 and she left the hospital the next day. Just to verify, we ran the pictures from her from that day through a reverse image search (click here to find out how) and found nothing that was published online before December 8th.