Home NEWS No, this colorful badge does not indicate membership of the new world...
Facebook
Twitter
WhatsApp
Linkedin
LINE 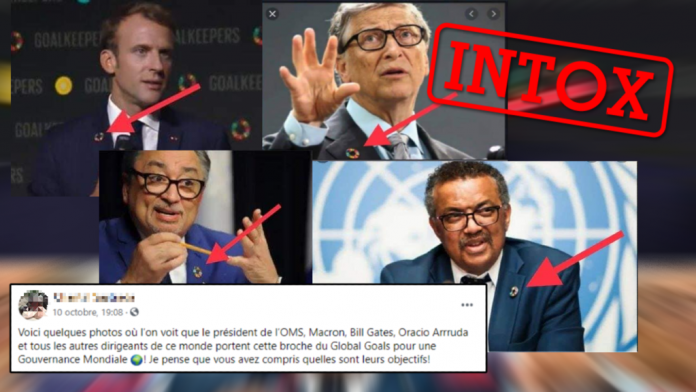 There are a series of photos circulating on social media showing various powerful people wearing a multicolored badge, which the post claims symbolizes that they are part of a secret organization that plans to dominate the world. In fact, this badge was designed by the UN to raise awareness of the goals of sustainable development.

One of these posts, which has been shared nearly 2,000 times on Facebook, includes four photos showing French President Emmanuel Macron; Horacio Arruda, National Public Health Director of Quebec; Tedros Adhanom Ghebreyesus, Director General of the World Health Organization and businessman and philanthropist Bill Gates. A red arrow on each of the photographs indicates that they all have the same multicolored badge.

The post, written in French, is translated as follows:

Here are more photos showing the head of the World Health Organization, Macron, Bill Gates, Oracio [sic] Aruda and all the other world leaders wearing this global goal badge for global governance! I think you understood what their goal is!

This social media user does not provide more information. He does not state this explicitly, but he does suggest the idea of ​​the new world order, a popular theory in conspiracy theory, that there is a secret plan to dominate the planet led by a small number of powerful individuals. So this post claims that everyone who wears this badge is a part of this secret organization.

Similar allegations circulated online back in April 2018. Some of the posts spread the conspiracy theory that Horacio Arruda was secretly working to advance Bill Gates’ interests.

Horacio Arruda works for a team and this is not the one from Quebec! It’s the one by Bill Gates and the Worlds that will force you to administer a vaccine and a micropuce. They carry all two of the global target global goals. #polqc #radcan #canpoli # covid19Qc pic.twitter.com/Mv0Rp32wgl

Twitter user Captain Capitalist (@leBlogduPlateau) wrote (in French): “Horacio Arruda works for a team and it’s not Team Quebec! He is with Bill Gates and other globalists who will forcibly vaccinate us and implant us with a microchip. They both have the globalist badge Global Goals. ”

Why this narrative is false

We ran each of these photos through a reverse image search, and it confirmed that each of them was authentic.

The photo of Emmanuel Macron was taken in 2018 during a speech he gave at the Bill and Melinda Gates Foundation in New York as part of the “Goalkeepers” conference.

The photo of Bill Gates was taken at the same event, but a year earlier, in 2017.

The photo of Tedro’s Adhanom Ghebreyesus was taken in 2018 during a press conference from the World Health Organization on the Ebola epidemic. The picture of Horacio Arruda was published by several media outlets in Quebec in 2020.

So what is this badge and why do so many people wear it? The social media user who posted this was right in that the badge refers to the “global goals”, which are the sustainable development goals defined by the UN in 2012 and adopted by the member states in 2015.

The UN defines these goals as a universal call to action to achieve goals by 2030 that aim to end poverty, protect the planet and guarantee that all people enjoy peace and prosperity. Anyone can order this badge on the UN website.

Screengrab on the UN website where you can buy one of these badges for $ 7.99.

Each of these 17 targets is assigned a color that includes an end to poverty, gender equality, climate action, or access to clean water and sanitation everywhere. The 17 colors together form the circular logo.

On its website, the UN states very clearly that these goals are “not legally binding”, but pushes governments to take action to achieve these goals.

So the various politicians and influential people who wear this badge are not part of a particular group or secret organization; when they wear this badge at important meetings or events, it symbolizes their support for these goals and their desire to work to promote them, even though they are not legally obliged to do so.

That is also the case for Bill Gates and his foundation. In 2017, they launched a project called “Goalkeepers” to push global leaders to work harder to achieve those goals.

Are we on track to achieve these goals?

In a speech to the UN General Assembly on 22 September 2020, UN Secretary-General Antonio Guterres gave a gloomy assessment, saying: “For the first time in 30 years, poverty is rising. Human development indicators are declining. We stop achieving the goals of sustainable development ”. He added that the Covid-19 pandemic had a massive and damaging effect on progress.

The UN Food and Agriculture Organization has also reported that the pandemic has affected progress towards these targets, leading to an increase in hunger and other forms of food insecurity.

The latest UN report on sustainable development goals, published in July 2020, contains some small signs of progress, including improving maternal and infant health, access to electricity and the representation of women in governments. However, the report concluded that these small signs of progress were not enough to achieve the goals.

This badge is a symbol of the UN’s goals for sustainable development, and when worn by politicians and public figures, it represents their support for working towards these goals for 2030. These goals are non-binding and recent reports show that they far from are met.