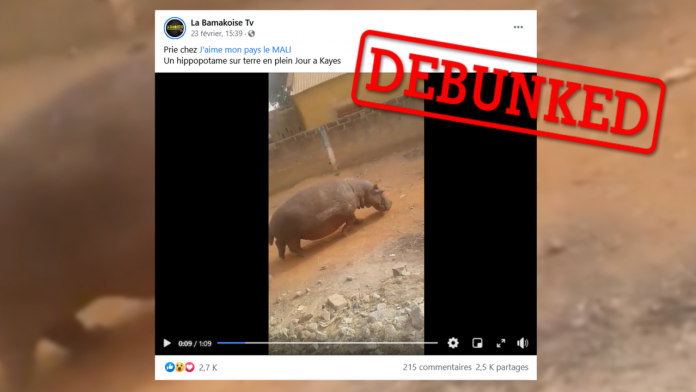 A video that reportedly shows a hippopotamus wandering the streets of a village in Mali has been shared repeatedly online since it was published on Facebook on February 23. It turns out, however, that this video was actually filmed on March 31, 2019 in Kedougou, Senegal. The JowharObservers team reported on the scandal that broke out when a hunter shot and killed the animal.

A video, which has received more than 142,000 views on Facebook, shows a hippopotamus speeding calmly down the streets of a village as passers-by watch. The caption reads: “A hippopotamus on land in daylight in Kayes.”

This video was published a few hours earlier by the Facebook page J’aime mon pays le Mali [I love my country, Mali], who has since published a mea culpa.

Some viewers expressed doubts about the origin of the video in the comments section. Some people mentioned that the uniforms that the police wore in the video did not look like Malian uniforms, while others noted that the language that people spoke in the video is not a language used in Kayes.

But this video was not filmed in Mali but in Kedougou, Senegal in March 2019, according to the Malian media outlet Le Jalon. A hippopotamus wandered into the city and caused the locals to panic before it was killed by a hunter.

If you look closely at the video that was published online on February 23, it is obvious that it was recorded in the same place as the videos from Kedougou were published online in March 2019. A 56-minute video published on Facebook on March 31, 2019 shows a brick wall in a building with thatched roof which is also shown in the recently published video. Both videos also show the pile of wood at the foot of the wall and a motorcycle and a pile of bricks in the background.

Fatoumata Konate, a Kayes City Councilor, confirmed to the JowharObservers team that no hippos have walked the streets of Kayes in recent days.

“I have not seen anything like this in this region since I was elected official,” said Konate.

Fake video, but a real issue in Mali

In April 2019, Jowharobserver teams reported on the public outcry after a hunter killed a hippopotamus in the video. Local people and environmental activists condemned the killing of the animal, which was trapped in a septic tank and did not pose a threat to anyone. Hippos are a protected species in Senegal and killing them is only allowed in legitimate cases of self-defense.

A social media user who shared the video of the hippopotamus, which was published on February 23, said that the animal had probably left the river due to the artisanal gold mining that took place there.

“This happens when we pollute the river with Chinese gold mining. A hippopotamus on the streets, near Kayes. ”

In this post, a social media user suggests that Chinese gold mining companies probably drove the hippopotamus to leave the river. © Facebook

Although this video of the hippopotamus was not filmed in Kayes, the environmental issues caused by gold mining, as the social media user noted, are definitely real. Kayes is the largest gold producing region in Mali. Mining companies produced 48 tonnes of gold in 2019. The machines and chemicals used for gold mining have polluted the Faleme River, which threatens the hippopotamus’ habitat.