Home NEWS No, this video does not show a man fainting after taking the...
Facebook
Twitter
WhatsApp
Linkedin
LINE 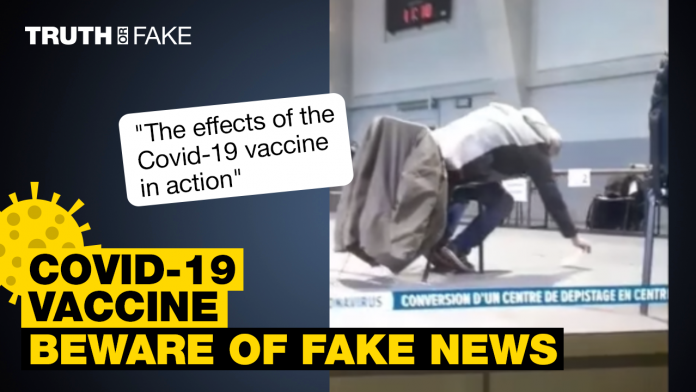 Social media is filled with fake news about the Covid-19 vaccine just days after several countries launched their vaccination campaigns. Many people are worried about potential nasty side effects, while others accuse the media of lying about it. In this series, the JowharObserver team receives four of the most widespread rumors. In this article, we look at rumors that a man in Belgium fainted after receiving the vaccine.

On December 8, the UK rolled out the Covid-19 vaccine manufactured by the American pharmaceutical company Pfizer and its German partner BioNTech. This was followed shortly by the United States and Canada, which began distributing the vaccine on 14 December. Bahrain and Mexico have also approved the Pfizer BioNTech vaccine.

The European Medicines Agency announced on 1 December that they had received applications from both Pfizer-BioNTech and the American laboratory Moderna for each vaccine. The agency said it would take a decision approving the use of the Pfizer-BioNTech vaccine on December 29 and the Moderna vaccine by January 12.

1 – Did a man faint after receiving the Covid-19 vaccine? No.

On December 14, a reader sent a video to the JowharObservers team asking us to investigate. The video appears to have been filmed in a vaccination center and shows a man falling from his seat, apparently after receiving the vaccine. A special post of this video on Facebook, from December 12, received more than 15,000 views. The caption reads: “The effects of the Covid-19 vaccine in action.”

This screenshot is from a Facebook post published on December 12th. The caption reads “the effects of the Covid-19 vaccine in action.” © DR

However, it’s pretty easy to find out the real origin of this video. The clue is the microphone, which is displayed at 0’23 “. It is marked RTL-TVI, which is a TV channel from Belgium and Luxembourg. If you write RTL-TVI and” center vaccination “is one of the first things that appears is the entire TV report that contains the clip.

So, what’s the real story? The film shows a training session at a Covid-19 vaccination center in Schaerbeek, part of Brussels, Belgium, which was carried out long before the first vaccines arrived. The voiceover journalist explains that the people you see in the report only play the role of those who will be vaccinated as a way to test how best to organize the center. The people present their (fake) papers, pretend to take the temperature and get a (fake) vaccine, all to determine the most effective organization for the process.

Thus, the patient shown fainting in the video is also just an actor pretending to faint. The report explains that in this scenario, the treating physician would come to help the person.

Even if someone faints after receiving a vaccine, it is not necessarily a sign that the vaccine is dangerous. Infovac, a French website with information on vaccines (not just Covid-19), explains that some people faint after receiving a vaccine. This is what is called a vasovagal response when you faint because your body overreacts to certain triggers, such as emotional distress or the sight of blood. The Air-France Vaccination Center explains on its website that fear of getting a vaccination can trigger a vasovagal response or fainting.

In the report from RTL-TVI, a doctor explains how there can be a “bit of psychological infection” that occurs when people receive vaccines.

“We have seen it happen in schools. For example, we can vaccinate a class and make four, five, six or seven students faint even if it is a standard vaccine. It is just a very common tetanus shot that does not cause a problem.”

The US Food and Drug Agency (FDA) analyzed the results of the clinical trials of the Pfizer-BioNTech vaccine. A report released by the FDA on December 10 explains that fatigue, headaches, chills, aches and fevers are the most common side effects.

Some social media users have also been concerned about several cases of Bell’s palsy or temporary facial paralysis that occurred during the clinical trials of the Pfizer-BioNTech vaccine. Others have posted about what they say was a lie about the first person to receive the Covid-19 vaccine in the UK.