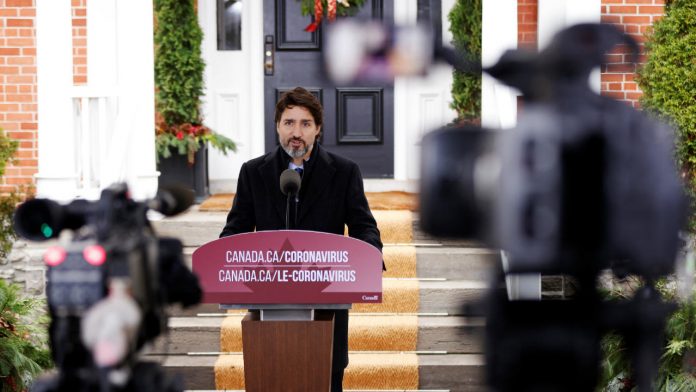 Prime Minister Justin Trudeau said on Friday that Canada’s hospital system could be overwhelmed by a possible quadrupling of new cases of Covid-19 by the end of the year, as its largest city, Toronto, was ready to impose a deadlock.

Trudeau urged Canadians to stay at home as much as possible when a second wave of the new corona virus sweeps across the country, forcing several of the ten provinces to reintroduce curbs for movement and business. Cases continue to rise in Canada and authorities are complaining that some people are more careless about taking precautions.

“An ordinary Christmas is frankly unthinkable,” Trudeau said. Earlier, Theresa Tam, director of public health, said that in the worst case scenario, an increase to 60,000 daily cases would occur if people became more sociable. Even if the current restrictions on meetings are maintained, new daily cases will jump to over 20,000 before 31 December, compared with less than 5,000 now.

I will work from home as much as possible in the coming days as well. Because it is up to all of us to do our part. We know what to do. We know it’s not always easy. But we know it works. If you do not have to leave your house, do not. #Stay home

“Cases across the country are on the rise … we really risk seeing cases of loads go up and hospitals get overwhelmed,” said a clearly upset Trudeau.

He dismissed the idea that Ottawa would invoke crisis powers to reintroduce the kind of widespread national shutdown that provinces introduced earlier this year, saying “I do not want to bring in a federal hammer to try to do things.”

However, Ontario’s Prime Minister Doug Ford announced on Friday that Toronto – Canada’s most populous city and the heart of the financial system – as well as the nearby Peel region would lock in on Monday.

“The situation is extremely serious and further action is needed to avoid the worst case scenario,” Ford said at a news briefing.

The lock-in, the restrictions of which include a ban on private indoor gatherings, will last for at least 28 days and violators may be fined $ 750 (US $ 570).

Meetings will be limited to ten people, as well as services, funerals and weddings.

Hairdressing salons and other places for personal care as well as gyms and casinos will be closed.

Schools will remain open, but restaurants and shops that are not important are only open for collection and delivery.

“We can not risk overwhelming our hospitals,” said Ford, with Canada’s most populous province just passing 100,000 coronavirus infections.

Separately on Friday, a federal official said that Canada expects to receive six million doses of Pfizer and Modern Covid-19 vaccines by March 31, 2021, but when the shots can be used depends on the agency’s approval.

Iain Stewart, chairman of the Public Health Agency of Canada, told a parliamentary committee that because the vaccines were new, manufacturers had to scale up to meet total demand.

“All countries are interested in the very first vaccines, and companies are trying to distribute to several countries at the same time, so the quantities start small and then build up in the coming year,” he said.