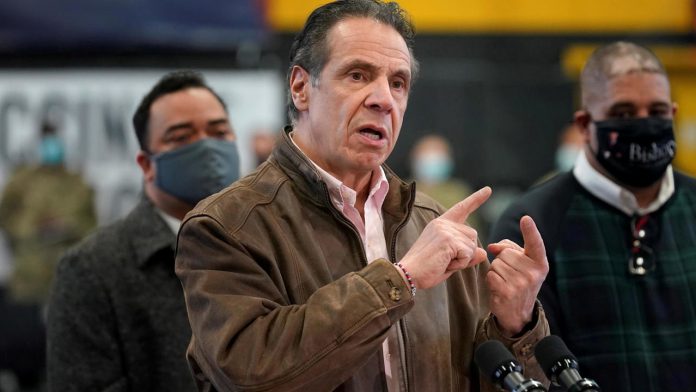 New York Governor Andrew Cuomo’s office on Sunday cleared an independent lawyer with lawsuits to investigate allegations of sexual misconduct against him.

The governor’s office backtracked on its original plan to elect its own investigator after widespread criticism from other Democrats.

“We will hire a law firm, replace them as attorneys for our office, and oversee a thorough and independent investigation,” New York Justice Minister Letitia James said in a statement.

Cuomo, one of the country’s most famous Democratic politicians whose popularity grew during the first months of the pandemic, has been accused by two former aides of sexual misconduct, criticizing other Democrats who ranged from calls for his resignation to appeals for an independent inquiry into his behavior.

In response to the latest allegations made on Saturday, the governor denied that he made sexual advances and originally ordered what he said would be a “full and thorough evaluation from outside” led by a former federal judge, Barbara Jones.

But after sharp reprimands from the Democrats, Cuomo reversed the decision – issuing a statement late Sunday saying he “never intended to insult anyone or cause harm.”

Cuomo said he is often jocular around the office and in public, referring to his frequent press conferences that contained lots of jokes with members of the media.

“I now understand that my interactions may have been insensitive or too personal and that some of my comments, given my position, made others feel in ways I never intended,” Cuomo said in a statement.

Cuomo ordered on Saturday what he said would be a “complete and thorough evaluation from the outside” led by Jones. But this move was quickly rejected by leading Democrats, including US Representative Alexandria Ocasio-Cortez of New York, who said she found Cuomo’s former assistants Lindsey Boylan and Charlotte Bennett extremely serious and painful to read.

In the latest allegations of misconduct, Bennett, who worked for the governor as executive assistant and political adviser for nearly two years until November 2020, told the New York Times that he had asked her about her sex life, including whether she was monogamous in her relationships. and if she had ever had sex with older men.

Her account was published days after Boylan, another former assistant, wrote in an online essay that the governor made several “inappropriate gestures” against her while she worked for the state government from 2015 to 2018, including sending her a rose on Valentine’s Day. and kiss her on the mouth.

Cuomo has denied wrongdoing in both cases. Reuters could not independently verify the women’s accounts. Attempts to reach both women have not been successful.

Cuomo became nationally prominent for his daily television reviews early in the coronavirus pandemic, when New York was the epicenter of the COVID-19 epidemic in the United States.

The allegations of sexual misconduct follow from a report issued in January by James’ office that questioned his administration’s handling of the coronavirus crisis in nursing homes. It said that the state health department significantly underestimated the death toll and implemented policies that may have contributed to it.

New York Mayor Bill de Blasio said on Sunday that two independent inquiries must now be made, one into Cuomo’s behavior and another into the deaths of nursing homes.

“Issues of this magnitude cannot hang over New Yorkers’ heads as we fight a pandemic and economic crisis,” de Blasio said in a statement.