Home NEWS NYC nurse first in US to be vaccinated against Covid-19 as the...
Facebook
Twitter
WhatsApp
Linkedin
LINE 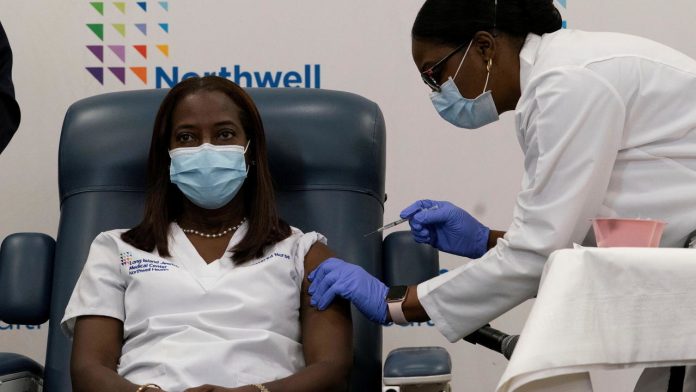 A New York City intensive care nurse on Monday became the first person in the United States to receive a coronavirus vaccine and said she felt “healing was coming” when the country’s COVID-19 death toll exceeded a staggering 300,000 lives lost.

Sandra Lindsay, who has been treating some of the sickest COVID-19 patients for several months, was inoculated at Long Island Jewish Medical Center in the Queens district of New York, an early epicenter of the country’s coronavirus outbreak, and received applause for a live stream with New York Governor Andrew Cuomo.

“It felt no different than taking another vaccine,” Lindsay said. “I feel hopeful today, relieved. I feel healing coming. I hope this marks the beginning of the end of a very painful time in our history.

“I want to create public confidence that the vaccine is safe,” she added.

“This is what heroes look like,” Cuomo wrote in the caption to a photo of Lindsay, wearing a mask and staring resolutely forward, which he posted on Twitter.

Similar scenes were played out at select hospitals in other cities, including Los Angeles, where California Gov. Gavin Newsom applauded as a Kaiser Permanente emergency nurse rolled up his sleeve for a pin stop on live television.

“It’s been an incredible morning. It’s historic,” said Dr. Leonardo Seoane after receiving a shot at Ochsner Medical Center in New Orleans, where he led some of the clinical trials that found that the vaccine was 95% effective in preventing COVID-19. disease.

The events that took place for television – the first coronavirus vaccinations in the United States outside of clinical trials – were part of a broad campaign by public health authorities and political leaders to reassure Americans of vaccine safety when they launched an unprecedented national immunization program.

Developed by Pfizer Inc and German partner BioNTech SE, the vaccine, with two doses at three-week intervals, received US emergency use permits on Friday.

By the end of the day on Monday, vaccine shipments had made it to almost all of the 145 U.S. distribution sites selected to receive the first dose, with a number of major hospital systems initiating vaccinations immediately.

“This is a race against time,” said Greg Adams, President and CEO of Kaiser Foundation Health Plan Inc.

U.S. officials said no major hiccups were reported. In an interview with reporters, US Army General Gustave Perna said that severe storms predicted this week could potentially block shipments to another 491 locations.

The vaccine’s arrival gave hope as the country passed 300,000 lives lost. Installation of COVID-19 hospital stays – a record 109,000 patients reported on Monday alone – has strained health care systems to the breaking point and more than 16 million U.S. cases of coronavirus have been recorded to date.

Over the past seven days, the United States has averaged 2,462 deaths per day, the highest since the pandemic began, according to a Reuters report.

The process of sending the first 2.9 million doses of vaccine began on Sunday, 11 months after the United States documented its first case of COVID-19.

The initial doses have been earmarked for healthcare professionals and care bohemians, with important workers, the elderly and individuals with chronic health conditions.

As part of a national security protocol aimed at ensuring the continuity of the government in the event of an emergency, early leaders in the executive branch, the congress and the judiciary were also offered early vaccines.

It will take months for vaccines to become widely available to the general public, and health officials have warned Americans to remain diligent about social distancing and wearing face masks to limit virus transmission.

The first vaccine shipments from the United States left Pfizer’s plant in Kalamazoo, Michigan, packed in trucks with dry ice to keep the cargo at the required temperature under the Arctic. The drive to airports in Lansing and Grand Rapids was then flown by UPS and FedEx aircraft to cargo hubs in Louisville, Kentucky and Memphis, Tennessee.

From there, they were transported or flown to the first 145 vaccination areas across the country. The second and third waves would go to 491 remaining seats on Tuesday and Wednesday.

“This is the most difficult vaccine development in history,” US Surgeon General Jerome Adams told Fox News on Monday.

Governors in 26 states and territories deployed troops from the National Guard to help with the operation, the guard said.

“Maybe by the end of late spring,” Fauci said, “so that when we get into the fall we can begin to approach a certain relief.”

US operation Warp Speed ​​top adviser Moncef Slaoui said the plan is to have about 40 million vaccine doses – enough for 20 million people – distributed by the end of the year.

This would include vaccines from both Pfizer and Moderna Inc. An external advisory panel to the US Food and Drug Administration is scheduled to review the Moderna vaccine on Thursday, and emergency use is expected to be granted shortly thereafter.