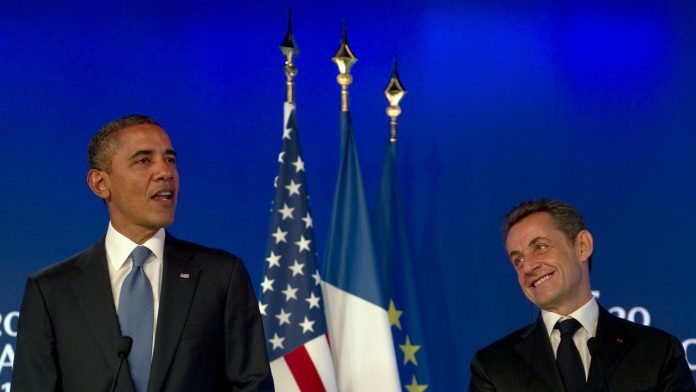 Donald Trump’s resignation from the White House will not be enough to heal America’s deep divisions, writes former President Barack Obama in his forthcoming memoir. He also gives his verdicts on the foreign leaders he encountered and describes France’s Nicolas Sarkozy as “his chest was thrown out like a bantam cock”.

In the first issue of “A Promised Land,” which sold out on Tuesday, America’s first black president reflects on the four years since he left office.

“Our democracy seems to be turning on the brink of crisis – a crisis rooted in a fundamental race between two opposing visions of what America is and what it should be,” the 59-year-old Obama wrote in an adapted and updated excerpt from his memoir, published on Thursday in the Atlantic.

The crisis “has left the body politically divided, angry and distrustful,” he says.

It has also “enabled a constant violation of institutional norms, procedural guarantees and compliance with basic facts that both Republicans and Democrats once took for granted”.

Obama says he was “encouraged” by the election victory of his former vice president, Joe Biden, and his ruling comrade Kamala Harris, and their “character and capacity to do the right thing.”

“But I also know that no single election will solve the issue,” he warns. “Our divisions go deep. Our challenges are daunting.”

In his memoir, the former president talks about the “birther” lie that Trump released that Obama was not born in the United States, according to CNN, which also received a copy of the book.

“It was as if my presence in the White House had triggered a profound panic, a feeling that the natural order had been disrupted,” Obama wrote. “Which is exactly what Donald Trump understood when he started making claims that I was not born in the United States and thus was an illegal president.

“For millions of Americans who were intimidated by a black man in the White House, he promised an elixir for their racial anxiety,” he says.

Obama also wonders whether his 2008 senator, John McCain, would have chosen someone other than Alaska Gov. Sarah Palin to be his mate “given the chance to do it again.”

“Through Palin, it seemed as if the dark spirits who had long lurked on the edge of the modern Republican party – xenophobia, anti-intellectualism, paranoid conspiracy theories, an antipathy to black and brown peoples – found their way to the center stage,” Obama added.

The 768-page plot traces Obama’s political career from the beginning to the end of his first term. He includes reflections on some of the most prominent foreign leaders and politicians he met.

By Sarkozy, France’s former “bling bling” president, Obama says he had “thrown his chest out like a bantam cock”.

Known for his luxury taste, Sarkozy spent an estimated $ 41,674 in gifts to Obama and his family in 2011 alone, including Hermès bags, crystal statues and Dior bathrobes.

But their often difficult relationship did not help when a biography of Carla Bruni-Sarkozy claimed that Michelle Obama told the French first lady that life in the White House was “hell”. Both the Obama administration and the Élysée Palace denied it at the time.

In his book, Obama also describes Russia’s Vladimir Putin as “physically impressive” and recalls his boredom in a meeting with China’s Hu Jintao.

He likens the Indian opposition figure Rahul Gandhi to an unhappy student, in biting comments about the dynastic scion that twice led his party to crushing defeat.

Obama writes that Gandhi has “a nervous, unformed quality about him, as if he were a student who had taken the courses and was anxious to impress the teacher but deeply lacked either the ability or the passion to master the subject,” according to The New York Times review of his book.