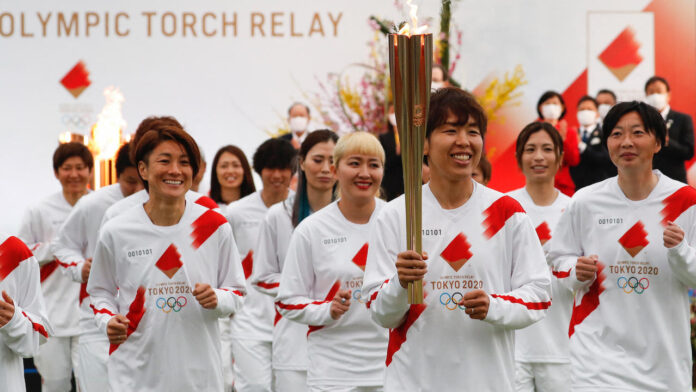 The torch relay in Tokyo started on Thursday, a year too late and without spectators, which was a big step towards the beginning of the coronavirus-delayed games on 23 July.

The pink gold, cherry blossom-shaped Olympic torch was lit at the J-Village sports complex in Fukushima, which served as a base for operations responding to the 2011 nuclear disaster.

At the launch ceremony, Tokyo 2020 CEO Seiko Hashimoto said she hoped the Olympic flame would act as “a ray of light at the end of darkness”.

“This little flame never lost hope and it was waiting for this day like a cherry blossom bud that was just about to bloom,” she added.

The nationwide relay, just like the Olympics, will be very different from previous releases, with spectators forbidden to cheer and be kept away from the launch and the first stage due to coronavirus problems.

Fans will be able to square and clap as the flame passes through the country, carried by 10,000 runners and passing through all 47 prefectures before arriving at Tokyo National Stadium for the opening ceremony on July 23.

But parts of the relay can be interrupted if too many spectators gather in one place and masks are mandatory for spectators.

The organizers made the final preparations for the relay last year when the coronavirus caused the historic decision to postpone the games, as sports around the world stopped.

A year later, the pandemic is still in full swing despite the expansion of vaccines, and organizers are fighting for general skepticism in Japan about holding the Olympics.

With foreign spectators excluded from the games and restrictions likely for domestic fans, the relay is seen as an important opportunity to build enthusiasm.

“The torch relay is intended to communicate that the Olympic Games will take place,” Tokyo 2020 CEO Toshiro Muto told reporters this week.

“It makes people feel like the games are starting – that’s the character of the torch relay.”

The relay launch will put the spotlight back on the region affected by the 2011 earthquake, tsunami and nuclear disaster.

The Games were originally referred to as the “Recovery Olympics”, which shows reconstruction in the northeastern region of Tohoku that was destroyed by the earthquake, tsunami and nuclear meltdown a decade ago.

The pandemic has overshadowed that message, but Fukushima’s torchbearers hope the relay will still shine a positive light in the area.

“From a distance, Fukushima may look like a place where time has stood still,” Hanae Nojiri, a TV reporter who will be one of the torchbearers, told AFP before the relay.

“But when people see the spectators lining the roads and the runners’ passion, I think they will update their image of the place.”

The relay will pass through some cities that are only partially open to the public, as decontamination continues in radiation-affected areas.

And some residents are ambivalent about the Olympics.

“It’s annoying if we’re going to be used for any kind of propaganda,” said Yoshiaki Suda, mayor of Onagawa City in the Miyagi region, recently.

Others are more concerned, with Fukushima Governor Masao Uchibori saying on Thursday that the torch would “connect people across Japan.”

“The reconstruction games are very special for people living in Fukushima. We want to show the energy of today’s Fukushima to the world. ”

The relay will take a circular route, first heading south to the islands of Okinawa before turning back towards the northern region of Hokkaido and finally back to Tokyo.

However, there are still challenges for the organizers.

Several dozen torchbearers have jumped off and cited issues including scheduling conflicts and concerns about coronavirus.

Officials from a region have warned that they can interrupt the relay there if countermeasures against viruses are not improved.

But the organizers hope that the event will give a break after a difficult year.

“People feel cut off from each other at this time,” Hashimoto said Wednesday.

“These 10,000 runners can get in touch with people everywhere.”