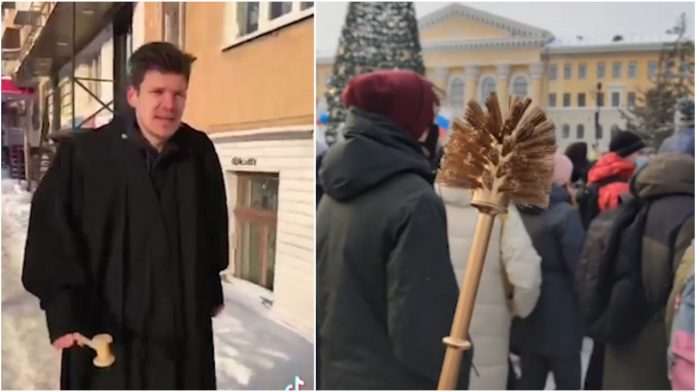 Opposition leader Alexei Navalny’s return to Russia, where he was given a speedy trial on January 17, sparked an online protest movement in the form of parody videos. The movement spread to the streets when Navalny’s anti-corruption organization broadcast a documentary about a palace belonging to Vladimir Putin on the Black Sea coast. On TikTok, young users published a number of videos condemning his arrest and the corrupt political system that they say rules their country.

On January 23, nearly 20,000 protesters gathered in Moscow, in addition to crowds in 113 other cities, to condemn corruption and Navalny’s prison.

On social media, young people also mobilized around the hashtag #FreeNavalny (# свободунавальному). This hashtag has garnered more than 340 million views on TikTok.

The videos filmed by these teenagers show portraits of President Vladimir Putin taken in classrooms. These portraits were sometimes replaced by pictures of Navalny.

Earlier, several trial parody videos had circulated on social media, ridiculing Navalny’s hasty hearing at a police station in Khimki near Moscow on January 18, less than a day after his return to Russia. The court’s verdict extended his sentence to 30 days – a decision which, according to Navalny (also a trained lawyer), was contrary to legal proceedings. Following the decision, he published a series of videos condemning the hearing as “a parody of justice […] at the height of illegality ”.

In this video, the young man walks into several shops and approaches people in his cars. “Hey, can I sue you? Apparently we can sue anywhere now,” he says. At the end of the video, the camera person asks him: “Who do you want to try?”, And he answers: “What difference does it make?”.

With the same idea, another internet user made a parody video in a bathroom with the defendant in the shower.

On January 19, two days after his arrest, the team from the Anti-Corruption Fund (FBK), an organization set up by Navalny, published a nearly two-hour documentary revealing the splendor of Guelendjik Palace, Putin’s home on the Black Sea coast. With a value estimated at more than one billion euros, many see it as evidence of widespread corruption in the upper echelons of Russian politics.

Outraged TikTok users published palaces inspired by the palace and even recreated the building on Minecraft, a construction game.

The survey, conducted by Navalny’s team, also revealed some unusual details about the palace, which include a water pipe lounge, a hockey hall dug under a nearby mountain and Italian toilet brushes worth 700 euros each.

Inspired, a protester applied golden spray to a simple plastic brush and swung it at a meeting organized in front of Tomsk University on 23 January. His video received more than 180,000 likes on TikTok.

Many users also filmed throwing or even burning their Russian passports in protest against the government. “Being against the authorities does not mean being against your home country,” one user wrote during one of these videos.

Following the success of this youth movement on social media, the Russian authorities have launched a counterattack. The Russian telecommunications authority Roskomnador issued a warning to TikTok and Vkontakte (the Russian equivalent of Facebook) and asked them to block all content that encourages “minors to participate in illegal activities”. Other platforms such as Facebook and Twitter were ordered to “block calls to demonstrate on January 23”, the French media reported for 20 minutes.

According to the opposition newspaper Novaya Gazeta, a certain “Public Organization for Youth Affairs” sent many Russian influencers an “urgent request for advertising content” via Telegram.

In exchange for 1,500 rubles, or about 16 euros, the influencers had to produce a creative video, filmed before January 23, which used one or two phrases from the list: “the protesters provoked the police”, “few people gathered”, “in general I’m tired of Navalny, “” I’m tired of politics and all these demonstrations, “” I want peace to return. ” The instructions specified that these phrases should be reformulated and not recited as such.

The “organization” sent additional documents that increased the payment to 2000 rubles, or 21 euros. Several influencers followed and published videos with the requested phrases, sometimes word for word, under the hashtags #NoToTheRevolution and #IDontWantARevolution (# нетреволюции and # нехочуреволюциюet).

These hashtags have garnered three million views on TikTok, representing less than 1% of the hashtags collected by the hashtag demanding Navalny’s release.