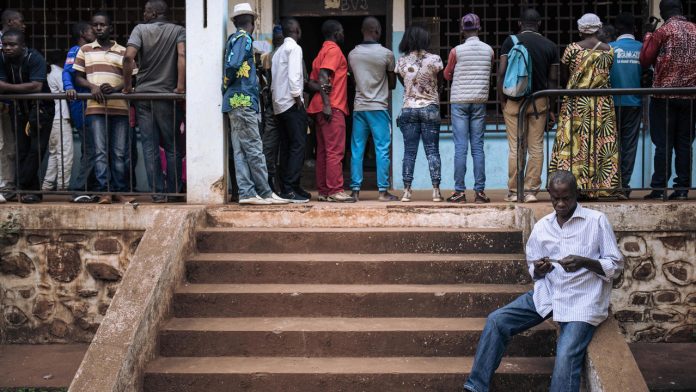 A strong opposition coalition in the Central African Republic on Wednesday demanded “the abolition, clean and simple” of weekend elections that were severely hampered by armed groups.

More than a third of the troubled country’s districts did not take part in Sunday’s first vote on the presidency and the National Assembly, according to official figures.

In a statement, the Democratic Opposition Coalition (COD-2020), an alliance of political and other groups in the coup-prone country, said the elections “were not fair and inclusive and did not in any way express the will of the people.”

Condemning a “farce” claimed the widespread vote and complained about the lack of observers in remote areas of the mineral-rich but poor country.

The twin election, which the government described on Tuesday as “credible, committed and popular”, has been seen as an important stability test for CAR.

The locked-in nation, one of the world’s poorest, has seen a series of coups and wars since gaining independence from France in 1960.

In 2013, bloodshed broke out once again when the then president, Francois Bozize, who himself had taken power a decade earlier, was overthrown by a mostly Muslim coalition called Seleka.

The leader in the narrow field with 16 candidates for the presidency is the incumbent Faustin Archange Touadera, who was elected in 2016 after a turbulent transition after the coup.

But his government controls only about a third of the country, with militia groups emerging from the 2013 conflict controlling the other two-thirds of the territory.

The government on December 19 accused Bozize of promoting a coup with several armed groups, which it said advanced against the capital, a charge that Bozize denies.

Fear of the rebels swept the city in the following days, even though the UN peacekeeping force MINUSCA said the advance had been stopped.

In many areas, militia groups blocked the election and intimidated voters, according to local leaders and UN workers who asked not to be named.

In addition, thousands of people were prevented from voting or never received their ballot papers due to lack of security.

Six other sub-prefectures succeeded in only one vote, Theophile Momokoama, chief rapporteur for the National Election Authority (ANE), told AFP.

The UN says many polling stations managed to open, but then closed quickly or remained empty due to threatening threats.

At a press conference on Tuesday, observers from international organizations, mainly the 11-nation Central African Economic Community (ECCAS) of which CAR is a member, expressed satisfaction with the election.

But Thierry Vircoulon, a researcher at the French Institute for International Relations (IFRI), said: “These are by-elections, they are not credible and do not meet international standards.”

The vote is expected to take three weeks as the votes have to be transported to Bangui in view of the uncertainty.

Touadera’s 2015-16 election victory was declared after an equally long period marked by accusations of disappearance of the ballot and other irregularities.

COD-2020 had already called on 19 December for the election to be canceled.

Nathalia Dukhan, a car specialist with a US NGO called The Sentry, said election fraud in the 2015-16 vote was “tolerated and thus legitimized” – it was considered the price of consolidating post-civil war peace.

“But today it is the entire political opposition that condemns massive rigging,” she said.

Government spokesman Ange Maxime Kazagui snatched the naysayers on Tuesday, insisting that the Central African people “showed their determination to go and vote, despite the dangers.”