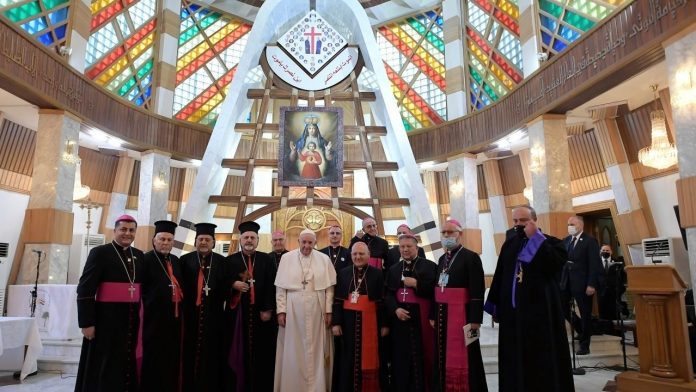 Despite a global pandemic and civil unrest, Pope Francis embarked on a three-day trip to Iraq on Friday, the first pope ever to visit the declining Christian community in the country. He aims to draw attention to the situation of the Church there, which dates back to the time of Jesus, and to promote interfaith peace.

“Iraq has suffered the catastrophic consequences of war, terrorism and sectarian conflicts, often rooted in a fundamentalism that cannot accept peaceful coexistence between different ethnic and religious groups,” Francis said in a statement on arrival.

While the pope’s agenda includes trips to a Muslim holy city and visits with Islamic leaders, his primary purpose in traveling to Iraq is to encourage the historical Christian community there, which dates back to the time of Jesus.

“The pope’s visit is to support Christians in Iraq to stay and say they will not be forgotten,” Chaldean patriarch Cardinal Luis Sako told reporters in Baghdad earlier this week. Francis’ goal, he said, is to encourage them to “hold on to hope.”

In the last two decades, the number of Christians in Iraq – most of whom are Catholic – has shrunk by 80 percent, from about 1.4 million in 1987, according to the Iraqi census, to less than 250,000 today, according to estimates. The instability that followed Saddam Hussein’s overthrow in 2003 put them in danger, and the rise of extremist groups in his wake ushered in an increase in violence against Christians, who were often victims of murders, attacks and kidnappings. Their situation became all the tougher with the arrival of the Islamic State group, which cut a string through cities in the Ninevah plains, which are traditionally Christian, forcing residents to flee.

Christians in Iraq are viewed with suspicion by much of the Muslim majority there and are seen as agents of the United States and the West in general. Like Christians in many countries in the region, they have long faced structural discrimination. Since 2003, the public sector has been largely controlled by most Shiite elites and has driven them out of the ordinary.

Most Iraqi Christians are Assyrians and belong to one of the branches of Eastern Christianity. They speak a dialect of Aramaic, the language that scholars believe Jesus spoke. Two-thirds of Christians in Iraq belong to the Chaldean Catholic Church.

‘A moment of hope’

But can a four-day visit make a difference for Iraqi Christians?

The visit gives people hope, says Father Patrick Desbois, who works with the Yazidi minority in Iraq. “I would say that the pope’s coming is like a moment of hope,” he told FRANCE 24. “It gives them dignity … it’s like a moment of light.”

That feeling was repeated by believers on the ground. “We hope the pope will explain to the government that it needs to help its people,” a Christian from northern Iraq, Saad al-Rassam, told AFP. “We have suffered so much, we need the support.”

But hope is not the same as change.

“For the Christians in Iraq … what can protect them in the long run is a constitution that actually protects the equality of all citizens,” said Ramazan Kilinc, an associate professor at Nebraska University, FRANCE 24. “I think that’s the key.”

Francis was greeted on Friday by Prime Minister Mustafa Al Kadhimi and then taken to the Presidential Palace in Baghdad for an official welcome ceremony. After the festivities, he went to the Church of Our Lady of Salvation, where suicide bombers killed 58 people in 2010 and thanked the priests there.

On Saturday, he will meet privately in the holy city of Najaf with the country’s chief Shiite priest, Grand Ayatollah Ali al-Sistani, marking the first meeting ever between a pope and a Grand Ayatollah. Francis will then attend an interfaith meeting in the ancient city of Ur, where Abraham, the patriarch of Judaism, Christianity and Islam, is said to have been born. He concludes the day with a Mass at the Chaldean Cathedral of Saint Joseph in Baghdad.

On Sunday, Francis will fly to Erbil to meet with Kurdish officials and then take a helicopter to Mosul, where he will pray for the victims of the war against the IS group. He will visit the Christian city of Qaraqosh and bless their church, which was used as a firing squad by the IS group. He ends the day by leading a fair in the football arena in Erbil. He leaves Iraq on Monday.

‘The whole world will watch’

The efforts of this trip are significant for the Iraqi government, which is keen to show the world that it can maintain a level of security and ensure the pope’s security, despite the ongoing militant attacks that continue to plague the country after years of war. In January, 32 people were killed in a suicide attack in Baghdad claimed by the IS group.

The Vatican will rely on Iraqi security forces for protection, but Francis has also made concessions. He is using an armored car for the first time instead of his usual pop mobile with an open top.

“This visit is really important to us and gives a good perspective on Iraq, because the whole world will be watching,” Tahsin al-Khafaji, a spokesman for Iraq’s joint operations, told the Associated Press.

And there are also health problems. Coronavirus cases have increased again in Iraq, and the majority of cases are of the variant discovered in the United Kingdom. The octogenarian pope has been vaccinated, as has his entourage, but most Iraqis have not, which means that those who come to see the pope may be at risk if social distances are not observed and people do not wear masks. The government is trying to limit the size of the population so that sanitary measures can be observed.