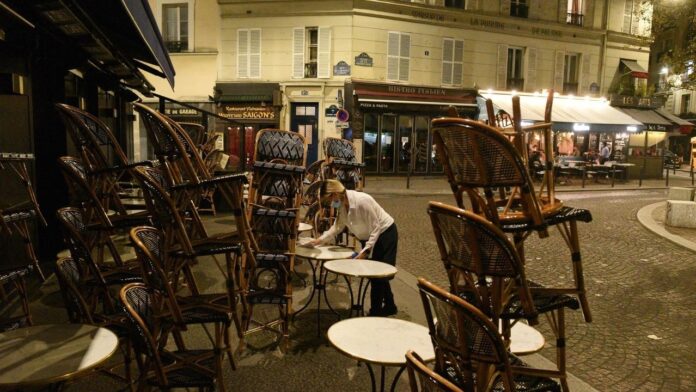 Thousands of Parisians enjoyed a final night last Friday ahead of a curfew aimed at curbing the second wave of Covid-19 infections. As of now, about 20 million people in the Paris area and eight other French cities should be home by 21.00.

A loud “cheer!” erupts from Au Doux Raisin, a bar in Paris’ Latin Quarter, while glasses filled with red wine shatter. A group of drunken students celebrate their last night half an hour before a curfew for Covid-19 takes effect in the French capital.

The bar manager looks uneasily as a police car shows up on the street and brakes as it passes the violent assembly.

“No more drinks tonight!” the manager certainly tells clients asking for one last glass of wine.

People are enjoying a final night on October 16 in Paris before the curfew for Covid takes effect. © Mehdi Chebil –

Most bars in the area already closed with waitresses cleaning tables and stacking chairs. The most forgiving bartender served one last drink in a plastic cup – and then asked customers to leave the room and drink it elsewhere.

Even the ubiquitous shops selling crepes or kebabs turned off their hobs and grills before midnight struck.

Similar scenes occurred around Paris and eight other major French cities on the evening of October 16, when a Covid curfew came into force at midnight.

From 17 October, any person who is out after kl. 21, carry a permit giving a valid reason outside. Coming back from work, going out to pick up medicine or walking a dog are valid reasons. Meeting friends, visiting family, eating out or having a drink at night is only allowed before December 1st.

Violation of the curfew will result in a fine of € 135 for a first offense and € 1500 if repeated. The French authorities insisted that this strict curfew from kl. 21 to kl. 6 was needed to curb an alarming rise in Covid-19 infections.

Walid Sadou (R) gets a drink at the restaurant “Les Cinq” on October 16 in Paris, a few hours before a curfew for Covid-19 takes effect. © Mehdi Chebil –

Thousands of people went out on Friday night in the French capital as the curtain was falling on Parisian nightlife.

“It’s the last night we can have drinks with friends, so we decided to go out and enjoy it,” Walid Sadou, a 29-year-old engineer, told FRANCE 24. “I can see the point of the curfew, it is “We need to try our best, but we are still human, at some point we will have to regroup.”

Others criticized French authorities for not doing enough to curb infections in public transport.

“They impose a curfew but do nothing about the metro, which is very crowded. The French government is behaving as if there was no Covid before 9pm,” Giulano Binda, a 25-year-old Swiss student, told FRANCE 24. ” Most students will instead go to private home parties in places where there are absolutely no sanitary precautions. “

Giulano Binda and Isabella Foglia, two students from Switzerland, are enjoying their last drink in a plastic cup outside after the bars were closed for the Covid-19 lockdown on October 17 in Paris. © Mehdi Chebil –

As for bar and restaurant owners, they consider night bans as the last straw for their business. The hospitality sector is still struggling to recover from the losses caused by the nationwide lockdown this spring. Opening just for lunch does not make sense for most restaurants.

“We’m open on the weekend, and that’s it!” Michel Lironis, owner of the restaurant “Les Baux” told FRANCE 24. The curfew brought him back bad memories from his youth in Greece when a junta took power and restricted civil rights.

“A curfew means fear and dead streets. It is not possible to stay open under these conditions,” Lironis said as he dismantled the wooden pallets he had used to build an outdoor patio.

Michel Lironis (L) and his crew remove wooden pallets used for an outdoor terrace before closing the restaurant. © Mehdi Chebil –

A few hundred meters down the same street, the owner of the restaurant “Les Cinq”, Alexandre Nguyen, said that he expected to lose 60 percent of his business turnover due to the curfew.

“Financially, it is not worth it. But we have decided to stay open because it is important to keep a relationship with our customers so that they come back when the situation improves,” Nguyen told FRANCE 24.

“The virus will be with us for a while and we have to adapt.”