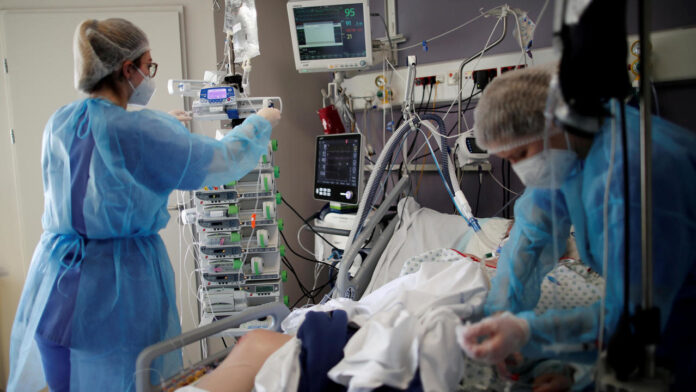 The number of people in intensive care in France who have COVID-19 is at the highest level since the end of November, health officials said on Tuesday when new infections increased slightly to 23,302 from 22,857 a week ago.

The new cases increased the cumulative sum since the pandemic a year ago to 3.93 million, the Ministry of Health reported, and the seven-day moving average of new cases was virtually stable at 21,333.

While France has registered over 20,000 new cases per day since the end of January, weekly folders have increased from almost five percent in mid-January, when a tighter curfew was introduced 18 to less than four percent in the last five days.

But despite a vaccination campaign focusing on the oldest and most vulnerable people, they have steadily increased in intensive care with COVID-19 from less than 3,000 people at the end of January to almost 4,000 on Tuesday.

The number of COVID-19 patients in intensive care units increased by 69 to 3,918 people, the most since November, during the last days of the second month lock. That month, ICU numbers peaked at just under 5,000.

In the Paris region alone, there are almost 1,000 people in the ICU with COVID-19, but the government does not plan to put the Ile-de-France region around the capital in lockdown, said France’s public health director.

He said that locking would be a last resort only if the hospital system could no longer cope.

The Ministry of Health also reported on Tuesday that 4.15 million people, or 7.9% of the adult population, had received a first coronavirus vaccine and 2.04 million had also received a second shot for a total of 6.2 million injections.

The government aims to vaccinate 10 million people in mid-April, 20 million in mid-May and 30 million in the summer.