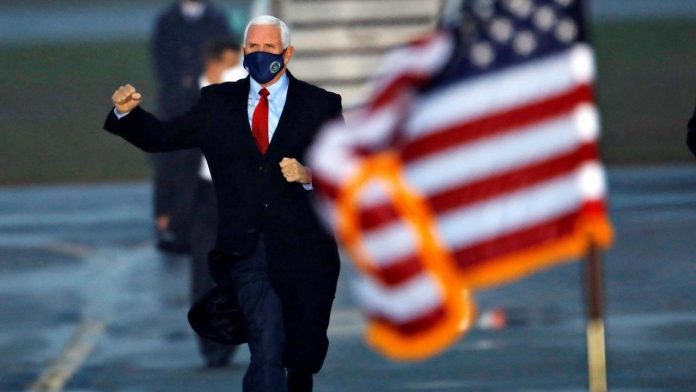 With nine days left until the November 3 election, the White House cited Pence’s status as a “significant worker” as the justification for his campaign trip despite being exposed by his chief of staff, Marc Short, who tested positive on Saturday.

A spokesman for the vice president said late Saturday that Pence and his wife had tested negative. Pence spoke at a meeting in Kinston, North Carolina, on Sunday and will be in Hibbing, Minnesota, on Monday.

In the last two days, the United States has registered its highest number of new Covid-19 cases – around 84,000 on Friday and around 79,900 on Saturday. The pandemic, which has caused about 225,000 American deaths and left millions of Americans unemployed, remains at the center of the presidential race.

As of Sunday night, 59,132,524 voters had already cast their ballots, according to the U.S. election project at the University of Florida.

Even as the new coronavirus rose in many parts of the United States, Trump told an airport meeting in New Hampshire: “There is no nation in the world that has recovered as we have recovered.”

While several Covid-19 vaccines are being developed, none are approved for use in the United States.

“We are not going to control the pandemic. We will control the fact that we are getting vaccines, therapeutic agents and other areas of mitigation,” Chief of Staff Mark Meadows of the White House told CNN’s “State of the Union” program.

In a statement released by his campaign, Biden seized on these comments, saying that Meadows “astonishingly admitted this morning that the administration has given up trying to control this pandemic itself, that they have given up their basic duty to protect the American people. “

“This was not a slip from Meadows, it was an obvious acknowledgment of what President Trump’s strategy has clearly been from the beginning of this crisis: to wave the white flag of defeat and hope that by ignoring it, the virus would simply disappear. . It does not have it and it will not, “Biden added.

The outbreak among Pence’s aides marked recent cases in the White House Covid-19, which have included Trump, First Lady Melania Trump, their son, Barron, and several aides and staff. The president was hospitalized for three nights this month under contract with Covid-19.

The new infections offered a reminder of how Trump and his allies have downplayed the advice of public health experts to wear masks and adhere to socially distant guidelines to combat Covid-19 transmission.

On Sunday, Trump paid a surprise visit to an apple orchard near Bangor, Maine, where he was greeted by hundreds of supporters who were warned about the event by a local newspaper.

Maine and Nebraska are the only states that share their electoral votes. Trump lost Maine in 2016 and delays Biden by about 10 percentage points this time, according to opinion polls. But he picked up an election college vote there in 2016 by winning one of its two congressional districts.

“Last time we got one episode. Let’s get the second episode,” Trump told the audience.

Biden had no campaign events planned for Sunday. The former vice president leads in national polls, but competitions in battlefield states that can determine the outcome look closer.

Asked why Pence did not follow U.S. guidelines for quarantine disease control and prevention for 14 days after such exposure, Meadows on Sunday quoted the vice president’s status as “essential personnel.”

CDC guidance states: “To ensure continuity in the operation of essential functions, the CDC recommends that critical infrastructure workers be allowed to continue their work after potential exposure to Covid-19, provided they remain asymptomatic and further precautions are implemented for to protect them and society. “The CDC Guide does not mention political campaigning.

To explain why the Trump campaign does not require people attending rallies to wear masks, Meadows said the campaign offered attendees masks but “we live in a free society.”

Biden’s running mate, Senator Kamala Harris, took four days off the campaign track this month after an aide was positive for Covid-19.

A Detroit spokesman criticized Harris Pence for continuing to travel, saying “he should follow the guidelines.”

Trump has spotted Biden for wearing a protective mask.

Sandwich Nelson of Harvard Medical School and Massachusetts General Hospital said it looked like Pence would be at high risk of becoming infected and transmitting infection.

“With several members of his office testing positive, this would be considered a work-based cluster. Whenever there is a cluster like this, I would recommend that the entire office transition to telecommuting for 14 days,” Nelson said.