Home NEWS People in the Comoros of the Indian Ocean are terrified of how...
Facebook
Twitter
WhatsApp
Linkedin
LINE 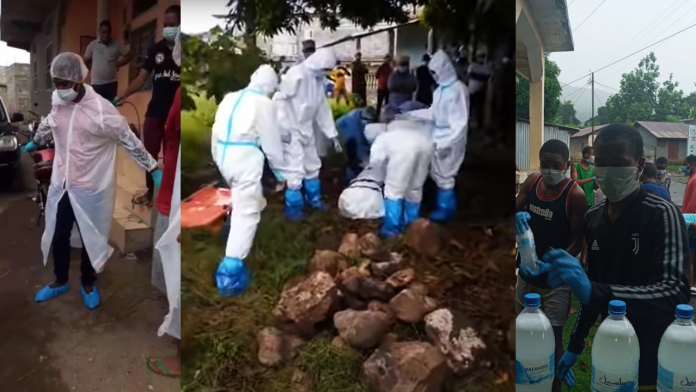 Twenty people have already died in the new wave of Covid-19 that hit Mohéli, one of the islands in the Comoros archipelago. Healthcare professionals and other affected volunteers are struggling with a lack of help, as well as a large part of the population who do not understand the safety measures to be taken to limit the spread. Our observer described the situation on the ground.

The Covid-19 pandemic has reached Mohéli, one of the four main islands that make up the Indian Ocean nation in the Comoros. There are a total of 116 active cases on the island, according to figures from the Comoros Ministry of Health. Mohéli has had the highest mortality rate in the archipelago, losing 20 people to the disease out of 30 registered deaths across the island nation, according to the latest figures published on 12 January. The island has a population of 850,000.

The health service has not yet confirmed which variant of Covid19 is available on the island. But Mayotte 1ère, a media outlet from the neighboring island of Mayotte, reported that patient zero was “a coach who had spent time in South Africa”, making it likely that he got the South African variant. And while the virus has not yet been sequenced on the island, medical teams have reported that “the virus is aggressive and highly contagious.”

The increasing number of cases has burdened the limited healthcare system, which has only 24 intensive care beds and four respiratory protection. A video filmed on January 10 shows sanitation workers collecting bodies in the Monimoimdji district of the capital Fomboni and burying them according to local custom. In that day alone, seven people died – the worst numbers since the beginning of the year.

“If the situation continues, I believe we will face both a health crisis and an economic crisis”

Mahmoud Ali lives in Mohéli. He is the principal contact of the Comorian Association for Family Wellbeing (known by the acronym de ASCOBEF). He collects donations and organizes their distribution.

“We created village committees to fight Covid-19. We try to support these groups by giving them masks and disinfectants. If someone needs to disinfect their home after a family member has tested positive for Covid-19, we will send a team of young people called “Movement for Youth Action” (MAJ) to disinfect the place.

It is a scary situation and people are afraid of how fast the virus will spread. A big problem is that when people get sick, they just stay at home and hope that they get better. They do not go to the hospital until the situation is critical and then it is too late.

Until now, many did not really realize how serious the virus is because no one in Mohéli died during the first wave that hit the Comoros [Editor’s note: in late April 2020]. Many people do not believe that the pandemic is real, but believe that the government is running a “corona company”.

I have often heard people say things like: “The government does not have money like that, to fill their pockets they invented the corona. Or they can just dismiss them and say something like ‘We are in the fruit season. There is always a fever going on around this season. “But slowly, with the recent deaths, people are becoming aware of the danger.

In recent days, it has been particularly difficult to handle the bodies due to heavy rain. When we dug into the ground, it caused landslides. The day before yesterday [Editor’s note: January 10], sanitation workers had to bury two bodies in the same grave because it was so difficult to find space.

This post by Bloc Central de Tsembehou, in French, reads: This morning heavy rain hit the Comoros islands 🇰🇲. The island of Mohéli in particular was hit hard. Here runs the Msoutrouni River.

One of the main problems is that Mohéli is isolated from the other islands and getting deliveries is difficult [Editor’s note: travel between Mohéli and the other islands has been suspended to limit the spread of the virus but the ban isn’t being fully respected, according to news site Clicanoo.re, from neighbouring Réunion Island]. I got permission from the Mohéli authorities myself and then rented a motorboat to get to the island of Anjouan so that I could collect donations from the Mayotte neighborhood. Some boats operate as ferries between the islands but it takes weeks to get a place.

There is currently a shortage of some basic products in Mohéli, such as canned food. The situation is even more complicated because most people in Mohéli are farmers. Their livelihood is due to their products being transported and sold on other islands. If the situation continues, I believe we will face both a health crisis and an economic crisis. ”

Currently, the Comorian government has refused help from Mayotte due to a disagreement over the transportation of medical supplies, according to 1ère Mayotte. At present, the Comoros has also refused support from France, although negotiations are ongoing.

However, the Comoros accepted aid from China on January 12: a team of 48 people travels first to Niger and then to the Comoros to help support local medical teams.