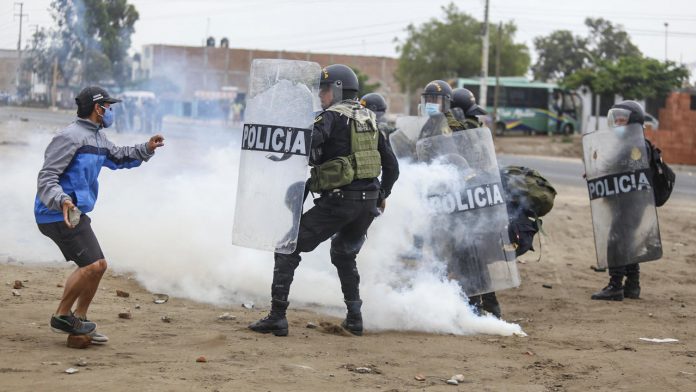 Peruvian government officials sat down for talks on Friday with representatives of agricultural workers who had blocked a highway to protest the deaths of three people in clashes with police.

Farm workers have been protesting for weeks to demand more wages. But 28 protesters and 36 officers were injured in confrontations, while 45 agricultural workers were arrested.

Authorities said three people, including a minor, were killed in clashes with police in recent days.

This called on workers to block part of the main Pan-American highway about 500 kilometers north of the capital Lima, in protest.

The blockade was held for two days until it was lifted before the talks on Friday. TV images showed police using tear gas and bird shots at protesters.

The Presidency of the Peruvian Council of Ministers said in a tweet on Friday that discussions had begun in the city of Trujillo and would involve “active listening” on the part of the Commission.

Workers are demanding that agricultural export companies raise their daily wages from $ 11 to $ 18, but a recently enacted law gave an increase of only 48 soles – about $ 13.

On Friday, a commission that the government said included ministers and deputy ministers for agriculture, labor, trade and other senior officials met with workers’ representatives.

After more than seven hours of talks, the participants agreed to draft an amendment to the Agricultural Act, which was adopted by Parliament on Tuesday, within 45 days.

“We urge representatives of (agricultural) workers at the national level to discuss the modification” of the Agricultural Act, “said Labor Minister Javier Palacios, adding that talks will continue over the weekend.

The talks came after a call for dialogue on Thursday by President Francisco Sagasti, who also promised to “sanction police who did not respect the ban on the use of firearms” against protesters.

Sagasti agreed that the new law “does not meet any of the parties involved” and undertook to set up a national forum “to discuss the future of the agricultural sector.”

The government announced an inquiry into the deaths during the protests, saying the chief of police in the La Libertad region would be removed.

Rural work protests over wages and conditions have been a feature of the Peruvian political scene in recent weeks. Since the protests broke out, there have been five deaths.