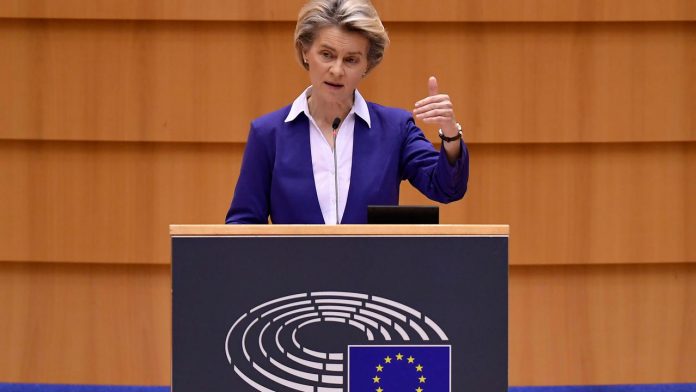 “Europe has invested billions to help develop the world’s first Covid-19 vaccines,” she said in a live video address to an online version of the annual World Economic Forum, usually held in Davos, Switzerland.

“And now companies have to deliver. They must fulfill their obligations, she said.

The Commission is demanding answers from the British-Swedish group AstraZeneca and the American company Pfizer about delays, both of which have announced their deliveries to the European Union.

As a sign of concern that pharmaceutical groups may sell the earmarked doses to higher bidders outside the block, it takes a step towards requiring companies to notify the authorities of exports to outside the EU.

Von der Leyen emphasized this initiative in his speech, saying “we will set up a mechanism for transparency in vaccine exports” to “ensure” that companies fulfill their contractual obligations to the EU.

The issue is sensitive for von der Leyen, who led efforts to get the Commission to provide more than two billion doses of potential Covid-19 vaccines for the bloc’s 27 member states, home to 450 million people.

Last week – after Pfizer’s announced delay but before AstraZeneca’s von von Leyen promised that the goal was to inoculate 70 percent of adults in the EU by the end of August. That goal is now in jeopardy.

The pace of EU launch has lagged behind the US, UK and Israel, although member states including Malta, Denmark and France have begun to accelerate their programs.

In his speech, von der Leyen said that the Commission’s vaccine procurement was not only for the EU but also for poorer countries outside the EU to be provided through a COVAX vaccination alliance led by the World Health Organization.

As part of a long-term strategy to address this and future health crises, von der Leyen said the EU would propose a public-private entity under a new European health authority.