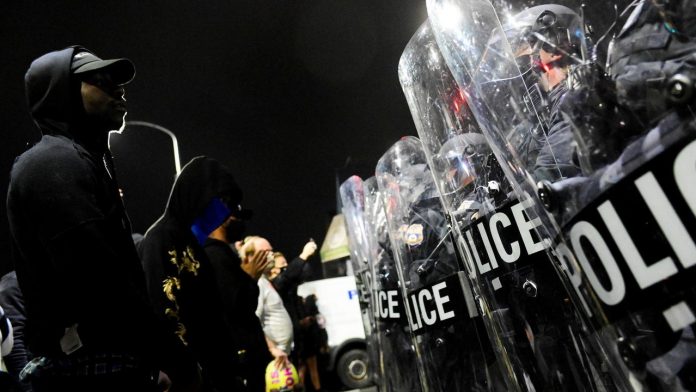 Hundreds of people demonstrated in Philadelphia late Tuesday with looting and violence in another troubled night after the recent police shooting of a black man in the United States. The victim’s family said they called an ambulance, not the police, for a mental health crisis, according to their lawyer

The Philadelphia Police Department warned on Twitter that “a large crowd” of about 1,000 people looted businesses in the Castor Avenue and Aramingo Avenue area and advised citizens to “avoid the area.”

* Alert * A large amount of appx 1000 looting companies in the Castor and Aramingo area. Avoid the area

Footage from a news helicopter appeared to show people breaking in and looting a Foot Locker sneaker store and another business. Elsewhere in West Philadelphia, where an estimated crowd of 1,000 people was gathered, an AFP reporter armed with batons clashed violently with several dozen protesters.

Pennsylvania Gov. Tom Wolf’s office announced the deployment of hundreds of National Guard troops to the city “to protect the right to rally and protest peacefully while keeping people safe.”

The family called for an ambulance, not police, the lawyer said

The unrest came when the lawyer for the victim’s family said they had called an ambulance to get him help with a mental crisis, not for police intervention.

Police said Walter Wallace Jr., 27, used a knife and ignored orders to drop the weapon before officers fired Monday afternoon. But his parents said Tuesday night that officers knew their son was in a mental crisis because they had been to the family home three times Monday.

Cathy Wallace, his mother, said that at one of these times they “stood there laughing at us”.

The Wallace family’s lawyer, Shaka Johnson, said the victim’s wife, Dominique Wallace, is pregnant and scheduled to have labor induced on Wednesday. Johnson said Wallace had nine children – two spoke briefly at a news conference late Tuesday with the victim’s mother and father.

“When you get to a scene where someone is in a mental crisis and the only tool you have to deal with it is a gun … where are the right tools for the job?” Johnson said, arguing that Philadelphia police officers are not properly trained to deal with mental health crises. Johnson said Wallace’s brother had called 911 to request medical attention and an ambulance.

In Washington, the White House issued a statement early Wednesday claiming the unrest was another consequence of the “Liberal Democrats’ war on the police” and that the Trump administration “stands proud of law enforcement and is ready to deploy anyone and all federal resources to end these riots ”.

“Law enforcement is an incredibly dangerous occupation, and thousands of officers have given their lives in the line of duty,” said Secretary of State Kayleigh McEnany in a statement. the courts and the judiciary. We can never allow mobsters. “

Joe Biden, the Democratic challenger in the November 3 presidential election, and his comrade, Kamala Harris, said in a statement that their “hearts are broken” for Wallace’s family.

But they also called on protesters to protest peacefully.

“No anger over the very real injustices in our society excuses violence,” they said.

More than 90 arrests were made during the first night of sporadic riots and looting in the city on Monday, and 30 police officers were injured, including one whose leg was broken when he was hit by a truck.

The United States has seen a wave of Black Lives Matter protests and riots since George Floyd’s death in May in Minnesota, when an officer was filmed pushing his knee into Floyd’s neck until the handcuffed man was lame.

Many of the protests have accused police of racism and brutality, but President Donald Trump has focused on the unrest to bolster his claims of being a “law-and-order” candidate in his election campaign against Biden.

Local media reported that two officers shot Wallace around 4pm local time on Monday after he refused to drop the knife when his mother tried to hold him back.

Phone video of the killing, posted on social media, showed Wallace pushing his mother away and then walking towards police.

“Put the knife down,” shouted one of the officers in the video, which went away as officers opened fire.

Wallace’s father, Walter Wallace Sr., said his son appeared to have been shot 10 times, according to the Philadelphia Inquirer.

“Why did they not use a Taser?” the paper quoted him for saying. “He has mental problems. Why should you shoot him down?” he added, saying his son had medicine.

The shooting of Wallace comes a week after an officer in Waukean, north of Chicago, shot dead 19-year-old black man Marcellis Stinnette as the officer opened fire on his vehicle.

“When does it end America?” asked civil rights lawyer Ben Crump at a news conference Tuesday.

“How many more black people are to be killed because of police brutality, excessive power, bias, systematic racism, deliberate indifference?”