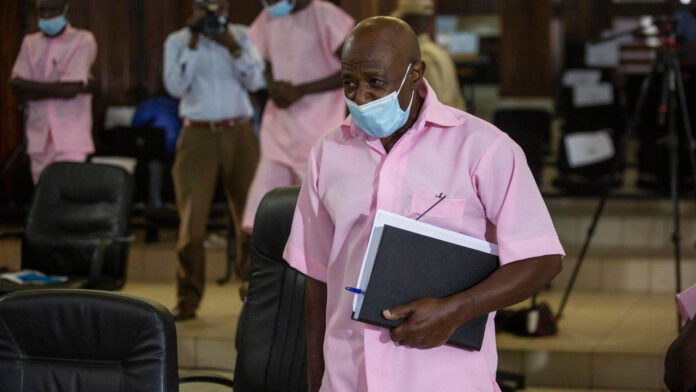 Paul Rusesabagina, the polarizing hero of the hit film “Hotel Rwanda”, refused to take part in his trial on Wednesday because a US citizen testified that he had financed rebel activities against his government.

Rusesabagina, whose actions during the 1994 Rwandan genocide inspired the film, has been charged with nine crimes, including terrorism, for starting an armed group in recent years accused of carrying out deadly attacks in Rwanda.

The 66-year-old, who had lived in exile in Belgium, was arrested in January, after being tricked into entering a plane to Kigali when he thought he was going to Burundi.

Rwanda’s Justice Minister Johnston Busingye admitted in an interview with Al-Jazeera last month that the government had paid for the flight.

At Wednesday’s hearing, a letter was read from the Nyarugenge prison where Rusesabagina is being held, saying that he “would never meet again in this court, not only today but also for future hearings.”

“He said he did not expect any justice from this court,” according to the letter, written by prison director Michel Kamugisha.

Presiding Judge Antoine Muhima ruled that the trial should continue.

The prosecution’s star witness, the American citizen Michelle Martin, a professor of social work who worked with the Rusesabagin Foundation a decade ago, testified for three hours.

She said she had been persuaded to email correspondence “on the financing of rebel activities” and accused Rusesabagina of “genocide denial”.

Martin revealed that when she discovered that Rusesabagina was “engaging in activities that appeared to be illegal, I left everything to the American law enforcement.”

Her contract, available at the US Department of Justice, showed that she was paid by the government to investigate Rwanda’s “conflict-generated diaspora” after the genocide.

Rusesabagin’s daughter Carine Kanimba told AFP that Martin’s testimony would never have stood in a fair trial because of her “conflict of interest”.

Meanwhile, Kitty Kurth, a spokeswoman for the Hotel Rwanda Foundation, said Martin had previously pushed Rusesabagina to join the democratic forces for the liberation of Rwanda (FDLR) – a group run by Rwanda’s Hutu rebels.

“She made the request as a paid spy from the Rwandan government,” she said.

Rusesabagina’s family insists that his rights have been trampled on and that he will not receive a fair trial, as he has been denied access to lawyers of his choice and has not been given access to more than 5,000 pages of documents in his case.

He is being tried along with 20 others, all of whom have pleaded guilty and prosecuted him.

Rusesabagina is credited with protecting hundreds of Rwandans at a hotel he managed during the 1994 genocide, in which 800,000 mostly Tutsis but also moderate Hutus were slaughtered.

But in the years since Hollywood made him an international celebrity, a more complex picture emerged of the strong government critic, whose tirades against President Paul Kagame’s regime made him an enemy of the state.

Kagame has been in power since 1994 and is accused by critics of crushing opponents and ruling through fear.

As Rusesabagina became more critical of Kagame’s anti-Hutu sentiment – an extremely sensitive issue in Rwanda – his image at home deteriorated as the regime attacked his character.

Opponents claimed he adorned his heroes, while some surviving groups accused him of taking advantage of their misery.

Rusesabagina has admitted that he helped form the National Liberation Front (FLN), but denied any roles in his crimes.

Rwandan authorities blamed FLN for a series of deadly attacks in 2018.

In a video from 2018 that supports FLN, Rusesabagina said: “It is time that we use all possible means to bring about change in Rwanda, because all political means have been tried and failed.”