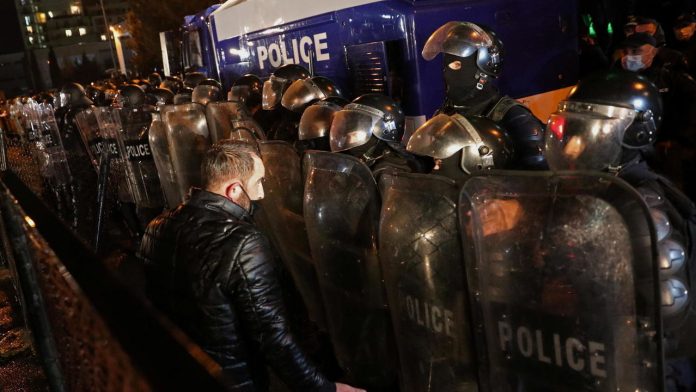 Georgian police fired water cannons and tear gas at hundreds of protesters outside the Central Election Commission (CEC) on Sunday in support of a call from opposition parties for a reconsideration on October 31, which they say was rigged.

Small groups of protesters began throwing stones at police. The protesters had moved to the CEC building from the capital’s main unit Rustaveli, where thousands of people held a peaceful demonstration.

Police said protesters tried to storm the CEC building. “Because the protesters used violent methods and did not follow the instructions of the police, the Ministry of the Interior used proportional force within its powers,” the ministry said in a statement.

The opposition demands that the CEC chief, Tamar Zhvania, resign and that new elections be called.

According to official results, the ruling Georgian dream party won 48.23% of the vote, with the largest opposition party, the United National Movement (UNM), taking 27.18%.

After the result gave the ruling party the right to form a government, eight opposition parties, including the UNM, said they would boycott parliament.

The opposition accuses the ruling party and its supporters of buying votes, threatening voters and observers and violating the bill. Georgian Dream leaders have denied the allegations.

Protesters moved to the CEC building after the 8 p.m. deadline to fire the election commissioner’s chief and to open talks on a new ballot that was adopted without a response from the government.

The economy of the South Caucasus has been hit hard by the coronavirus outbreak. The government said on Saturday that it would impose an overnight curfew from Monday between 22.00 and 05.00 in the largest cities due to a sharp increase in cases since the beginning of September.