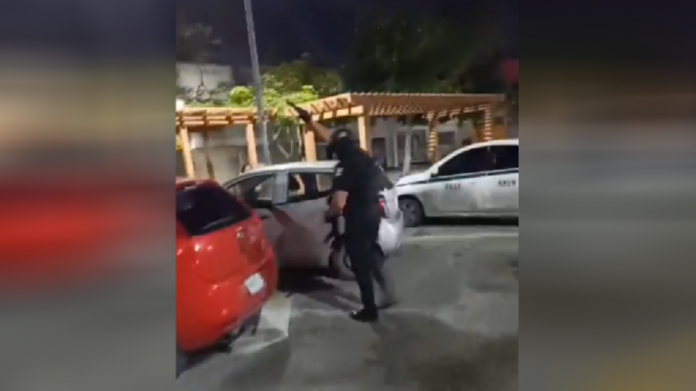 Several people were injured when police opened fire during a protest against femicide in Cancun, Mexico on November 9. People all over the world expressed shock and horror when the news of the abuse spread on social media.

The protest was called after three murders of women in Quintana Roo: One woman was killed in the city of Jose Maria Morelos and two others in Cancun. Their bodies showed all signs of torture. The protesters, gathered by the feminist network Quintana Roo, demanded justice for the victims and condemned violence against women in general.

The protest against the murder of women took place in Cancún on 9 November.

Nadia, a member of a group called DAS (which stands for rights, autonomy and sexuality in Spanish) and Pride Cancun (Fierte Cancun) took part in the protest.

I went to the protest because I was really affected by these three women killers and because Mexico is not a safe place for women in general. Feminist organizations have been working with the authorities on these issues since the major protest held in Cancún on March 8. [Editor’s note: on International Women’s Day], but unfortunately nothing happens fast.

We gathered around 5 pm in front of the public ministry building, because it is the government body that is responsible for investigating the killing of women.

Members of women’s rights organizations were there as well as the family members of Alexis [Editor’s note: 20-year-old Alexis was one of the women killed in Cancún that weekend] and her friends and teachers.

There were many teenagers who participated. I think there were about 600 of us in total [Editor’s note: the media reported around 2,000 people]. Some carried pictures of the victims. There were speeches. We stayed there for about two hours.

Some people wanted to go to City Hall. But on the way, some people started destroying traffic signs. When we got there, I think there were only about a hundred of us left. We shouted “Justice for Alexis!” but then some people started damaging the town hall, breaking windows and throwing stones. Some people even went into the building and came out with things.

Nadio filmed this video in front of Cancun City Hall on November 9. You can hear women shouting for justice for Alexis and the sound of windows breaking.

That was when a group of policemen came down on us. I saw them about 20 or 30 meters from me and then I heard shots being fired. I started running, along with everyone else, to hide in a nearby park. I do not know if they fired real bullets or rubber bullets, but later real bullets were found at the scene.

The police beat some people and made several arrests. This is the first time I have seen this type of violence against a protest in Cancún. We wonder who gave the order for the police to act in that way.

Nadia sent this video to our team. It was filmed by someone close to her when police opened fire in front of Cancun City Hall on November 9.

This video, filmed in front of Cancun City Hall on November 9, shows the police violently cracking down on protesters from 1 p.m. 30. The man who films the film shouts: “I’m here with them! Calm down, these are my students! “At. 02.05 he says to a policeman: “Are you aware that you are shooting bullets during a peaceful protest?” You can hear shots being fired during most of the video.

Police violently pushing a protester during a demonstration in Cancun on 9 November.

At least four people were injured during the demonstration, according to Mexican media. Two journalists were shot – one in the shoulder and one in the leg.

Cancun’s Chief of Public Security was removed from office

No local officials have yet taken responsibility for what happened. The governor of Quintana Roo, Carlos Joaquín Gonzalez, said he gave “exact instructions” that there should be “no physical violence and no weapons during the protests this day”.

Quintana Roo’s secretary of public safety, Alberto Capella, said he had called for an “internal inquiry”. The Mayor of Cancun, Mara Lezama, also claimed that she “had given specific instructions to launch investigations [into the incident]”.

She also demanded that the city’s head of public safety, Eduardo Santamaría, be “immediately removed from his post”.

Many human rights organizations, including the UN High Commissioner for Human Rights in Mexico, Amnesty International and Human Rights Watch, condemned “excessive use of force” and “deadly weapons” during the protest.

Last year, a total of 34,608 intentional homicides and 1,012 homicides were reported in Mexico – cases in which a woman or girl was killed by someone, usually a man, because of her gender – according to official statistics.

The figures represent the highest number of murders of women since officials began collecting data on these crimes.