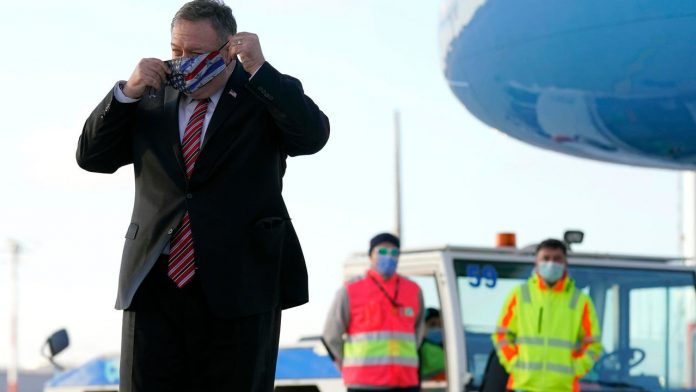 US Secretary of State Mike Pompeo strongly criticized Turkey at a NATO ministerial meeting, told participants in AFP on Wednesday and raised hopes of some allies to push for sanctions against Ankara.

A US spokesman would not confirm or deny details of Pompeo’s participation in Tuesday’s foreign minister’s video conference, but several well-placed sources described the exchange as heated.

Turkey has been criticized for its stance in a maritime territorial dispute with NATO member Greece and its support for Azerbaijan in the recently revived conflict with Armenia over a disputed enclave.

European warships are also trying to impose an arms embargo on war-torn Libya, with Turkey supporting the Tripoli government.

Some NATO and EU members – with the exception of France – have been wary of criticizing President Recep Tayyip Erdogan’s government for fear of escalating the crises.

But Pompeo, who attended one of his most recent NATO meetings – as US President Donald Trump’s administration will leave office next month – did not hold back from exchanging with Turkish Foreign Minister Mevlut Cavusoglu.

Senior participants told AFP that Pompeo accused Turkey of playing into the hands of NATO rival Moscow by buying the Russian S-400 missile defense, despite opposition from the Allies, a participant told AFP.

And he urged Ankara to behave more like an ally, accusing it of thwarting efforts to build unanimity for vital reforms, according to those who took part.

“His intervention was quite brief but very clear,” the senior official told AFP, speaking on condition of anonymity to describe a closed-door diplomatic discussion.

Another source familiar with the talks said the exchange was “powerful”.

The Foreign Ministry’s official reading of the meeting did not mention Turkey, but Pompeo has been critical of Ankara in recent weeks.

Washington’s chief diplomat was in Paris last month and told Le Figaro daily that he had spoken to President Emmanuel Macron and agreed that Turkey’s recent actions had been “very aggressive”.

Germany is leading a diplomatic outreach to Turkey to try to resolve some of the European capitals’ concerns, and NATO has set up a “settlement mechanism” to counter unintentional clashes with Greek forces.

But some EU members are also seeking financial sanctions.

Macron clashed with Erdogan at the NATO summit in London in December, but the Turkish leader was reportedly defended by Trump.

During this week’s talks, the US envoy was less protective of Turkey, and France and Luxembourg joined Pompeo to continue the attack.

EU members will decide at a summit on December 10 whether to initiate the process of imposing sanctions on Turkey for violating Greek waters in search of gas or violating the UN arms embargo on Libya.

“Ankara no longer has much support in the EU, as the Turks have not adopted any more positive behavior since the adoption of the dual strategy in October,” an EU official told AFP.

The dual strategy – German-led diplomacy backed by the threat posed by the EU by drawing up lists of potential sanctions targets – is still supported by German Chancellor Angela Merkel.

But according to sources to AFP, she may be the last figure to resist sanctions when the EU next meets in the matter.