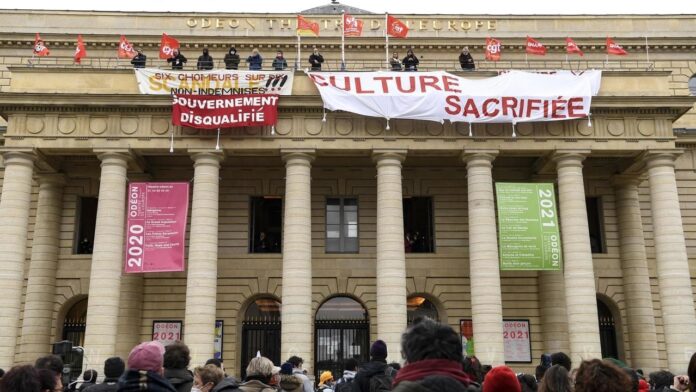 French protesters had occupied three of the country’s four national theaters on Wednesday to demand an end to the closure of cultural venues introduced due to the pandemic, as frustration grows with the month-long performance.

Theaters, cinemas, museums and other cultural spaces have been closed since France’s last complete closure in October and have remained closed despite the reopening of most businesses in December.

University students spent Monday night protesting at the Pau Theater in southern France. Similar acts were seen on Tuesday at two other theaters, Colline in eastern Paris and the National Theater in Strasbourg.

The pressure has been building for weeks and thousands marched in cities across France last Thursday to demand a resumption of the cultural sector, albeit with regard to social distance measures.

The Paris March ended with about 50 people forcing themselves into the closed Odéon Theater on the left bank and refusing to leave. Protesters sat in the ornate lobby and on the velvet balconies of the 19th-century theater with sleeping bags and food and promised to stay as long as it takes the authorities to meet their requirements.

“This is a national movement,” said Karine Huet, secretary general of the National Union of Musical Artists in France. “Regional unions have responded and construction is underway. They are being organized,” she told AFP from inside Odéon on Tuesday.

In addition to the resumption of cultural institutions, protesters are demanding an extension of tax exemption for freelancers and seasonal workers facing a precarious economic and psychological situation due to a “lost year” caused by the Covid-19 crisis.

Minister of Culture Roselyne Bachelot visited Odéon on Saturday and promised to continue the negotiations.

“Tonight I went to @TheatreOdeon, busy for 3d now. I understand the concern about the continuation of the lost year: They know, my goal is to continue to protect artistic employment for as long as necessary. We will continue the exchange. #odeon, ”Bachelot wrote on Twitter.

I’ve been performing this evening at @TheatreOdeon for 3 years. I include the studies especially on the suites of the white year: they know, my goal is to pursue the protection of artistic employment as necessary. We pursue our exchanges. #odeon pic.twitter.com/8sZh3booqp

But the union’s response has been unequivocal. “Busy! Busy! Busy!” was the conversation on Tuesday from the culture section within the CGT union and added that this was a direct follow-up from the “Yellow Vest” protests that shook the country two years ago.

At the Colline Theater in Paris, the students held signs with the text “Opening essential” and “Bachelot, if you do not open, we will play at your home.”

Colline’s playwright and director, Wajdi Mouawad, was in the middle of rehearsals when protesters arrived on Tuesday, a source from the theater told AFP. Mouawad allowed about 30 art students – from the National Conservatory of Dramatic Art, the Higher School of Dramatic Art and the studio theater school in Asnières – to enter the arena.

In Strasbourg, 51 students from disciplines from scenography to costumes to plays and directing joined the movement and settled to occupy the city’s national theater “until the state gives a concrete answer”.

The students hoped to “draw the government’s attention to the seriousness of our situation and improve the rights of temporary workers in the entertainment industry affected by the health crisis,” they said in a statement.

They called on “all national high schools of dramatic art in France and conservatories” to join the movement.

France has one of the world’s most generous support systems for artists, providing a living wage to all kinds of people working in the arts and media.

But the system has been strained by the upheaval caused by the pandemic, and many have fallen through the cracks.

There are also concerns about some of the government’s decisions, such as keeping large museums closed while reopening small private galleries.