Home NEWS Protesters with yellow vests go to trial during the riot from the...
Facebook
Twitter
WhatsApp
Linkedin
LINE 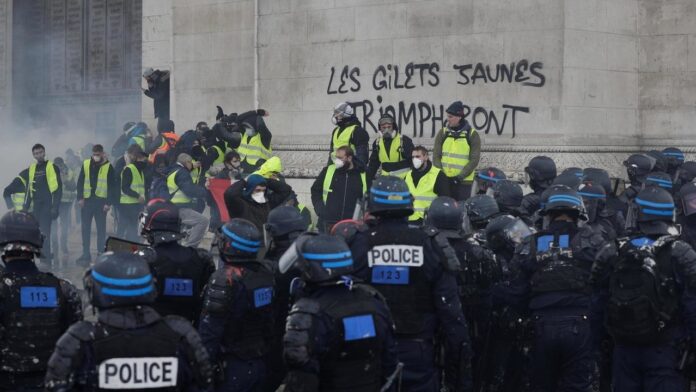 Nine people went to trial on Monday accused of taking part in one of the most violent episodes of anti-government “yellow west” protests that shook France two years ago.

Prosecutors, however, admit that the suspects are neither the initiators nor the main culprits in the vandalism and looting around the Arc de Triomphe in Paris, when scenes of destruction and violent collisions with the police made global headlines.

Dozens of cars were set on fire and businesses romped along the famous Champs-Elysees Avenue on December 1, 2018, the third Saturday of mass demonstrations against President Emmanuel Macron.

He was accused of ignoring the situation of French families who were struggling and after months of protests he abandoned a planned increase in the fuel tax and increased the expenses of the lowest earners.

The protesters with the “yellow vest” had already tuned in with security forces at previous meetings, but the police were not prepared for the riot that hit the capital just a few weeks before Christmas.

Despite firing lots of tear gas and rubber bullets, the officers were forced to abandon their positions around the Arc de Triomphe, honoring France’s war dead.

Protesters smashed the eternal flame over the grave of an unknown soldier from the First World War and spray-painted the stone walls with graffiti including “the yellow vests will win”.

Others forced themselves into the arch, looting the gift shop and damaging many works of art, causing damage that cost 1.2 million euros to repair.

The seven men and two women who are facing trial on Monday, most of whom do not have criminal records, are facing charges of destruction and theft with a maximum of 10 years in prison.

For procedural reasons, a tenth suspect who would also be brought before the judge will appear in court at a later time.

The trial began with presentations of videos and photos showing the extent of the damage, including smashed statues and smashed exhibition cases.

“You see things go out of control, and you do not say to yourself ‘this has gone too far, I’m leaving’?” asked Judge Sonia Lumbroso.

Lawyers for the accused say they are unfairly blaming the biggest criminals for escaping before the police could clear the monument.

“This is a trial against small fish, because the big fish is not here,” said Veronique Massi, a lawyer for one of the suspects, who said he only sought refuge as police accused him.

“They wanted to be the core of the plot, they did not think it would end that way,” she said.

But for Jean-Philippe Morel, a lawyer for the HAPPAH Heritage Association, a complainant in the case, there is sufficient evidence to prove that the suspects participated in the violence.

“We have those in charge,” he said, “even if they are not the most important.”

The trial is scheduled for Friday.

Seven other people, including a minor, will be tried later on charges of illegal entry into a historical monument.