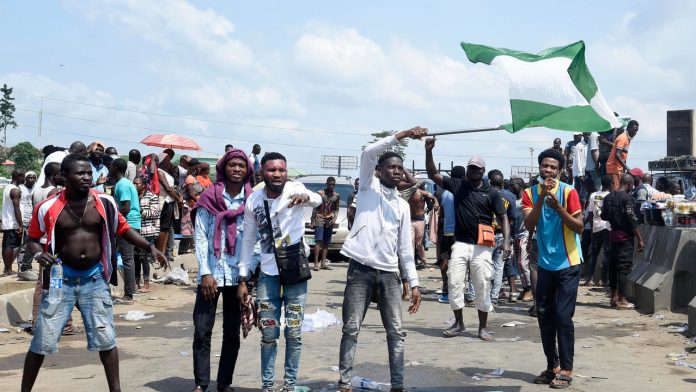 At least 12 people were killed by the Nigerian army and police in two places in Lagos on Tuesday in a deadly breakdown of demonstrations, Amnesty International said.

Peaceful protesters were gathered despite a curfew imposed to end spiraling protests over police brutality and deep-rooted social complaints.

Evidence gathered from eyewitnesses, videos and hospital reports confirms that the Nigerian military opened fire on thousands of people between 1 p.m. 18.45 (1745 GMT) and at 21:00 (2000 GMT) on Tuesday, October 20, “Amnesty International said in a statement.

Lagos’s governor initially insisted no deaths had been recorded, but later said authorities were investigating a person’s death as a result of “blunt force trauma to the head”.

He said at least 25 people were injured.

Demonstrator Paul on Sunday, who was at the scene, told AFP that the men who shot at the crowd were wearing masks and wearing uniforms from the army.

“They attacked us from behind and in front,” he said. “They came around 7pm when it’s dark everywhere.”

Photos and videos showing scenes of chaos in the wake of the shooting were widely shared on social media.

The shot led to international condemnation, with UN High Commissioner for Human Rights Michelle Bachelet saying reports suggested it could have been deliberate.

“There is little doubt that this was a case of excessive use of force, which resulted in the unlawful killing of live ammunition by Nigerian armed forces,” she said.

“Reports that CCTV cameras and lighting were deliberately disabled before filming are even more disturbing, as they, if confirmed, suggest that this deplorable attack on peaceful protesters was deliberate, planned and coordinated.”

Human Rights Watch confirmed reports that the Nigerian army had opened fire on the crowd in a “shooting”.

“The authorities should immediately withdraw the military from the streets,” said Anietie Ewang, a Nigeria researcher with the rights group.

#Nigeria: After soldiers opened fire on a group of protesters in Lagos last night, authorities were to immediately withdraw the military from the streets and identify / prosecute officers responsible for or contributing to excessive use of force against protesters. #EndSARS @hrw pic.twitter.com/R2UDQ4Ytyk

The Nigerian army did not respond to AFP’s requests for comment, but on Twitter it called reports of soldiers firing on protesters “fake news”.

The West African ECOWAS bloc appealed to the Nigerian government, its youth and civil society “to engage in dialogue as soon as possible for an early and amicable solution to this social unrest and to maintain the Nigerian image as a bastion of law and order.”

Nana Akufo-Addo, President of ECOWAS and President of neighboring Ghana, said in a statement that he had spoken to Nigerian President Muhammadu Buhari, who had “started the processes that will lead to reform”.

The center of Lagos, a large city home to 20 million people, was largely deserted and shops were closed on Wednesday under a curfew.

An AFP journalist said several buildings were burned around the shooting range and remnants of the violence – broken glass, cracked banners – could be seen.

A few people were driving around, but protest hotspot Lekki Toll Gate was emptied, leaving only graffiti condemning police violence and bad governance.

A dozen soldiers and heavily armed police officers patrolled nearby.

In another district, a bus station burned down and there were sporadic clashes between bottle-throwing youths and police, who occasionally fired into the air.

A television station affiliated with one of the ruling party’s most powerful politicians was also burned.

Concerned about the escalating violence reported Wednesday in a number of cities, including Lagos, the International Committee of the Red Cross called for restraint.

“It is extremely important that first responders and ambulances are respected by all so that they can reach the injured safely,” said Eloi Fillion, Head of the ICRC Delegation in Nigeria.

In a television broadcast, Lagos State Governor Babajide Sanwo-Olu ordered that all “state activities” be stopped throughout the city for three days.

He said he had requested an investigation into “the rules of engagement used by the men in the Nigerian army deployed” at the scene during the shooting on Tuesday.

At least 56 people have died across the country since the protests began on October 8, with approx. 38 were killed Tuesday alone, according to Amnesty.

President Buhari was not yet to address Tuesday’s incident directly, but in a statement on the protests, the presidency said he had appealed for “understanding and calm across the nation.”

A coalition of civil society organizations in Nigeria said on Wednesday that they were “deeply shocked by the killing of peaceful protesters”.

“The attempt to fight for justice over the brutality of the police has once again revealed the brutal nature of the Nigerian state,” it said in a statement.

According to the group, “no less than 40 Nigerians have lost their lives as a result of violent attempts to crack down or disrupt the ongoing protests against police brutality.”

Nigeria, where the median age is 18, is a tinderbox with deep economic and social complaints.

British Foreign Secretary Dominic Raab said on Wednesday that he was “deeply concerned” about violence in Nigeria.

“The Nigerian government must immediately investigate reports of brutality by the security forces and hold those responsible accountable,” he said in a statement.

Since Tuesday, Rihanna, Beyonce, Nicki Minaj, Ugandan pop star-turned-politician Bobi Wine and Manchester United striker Odion Ighalo have added their names to a list of celebrities who have supported the protesters.