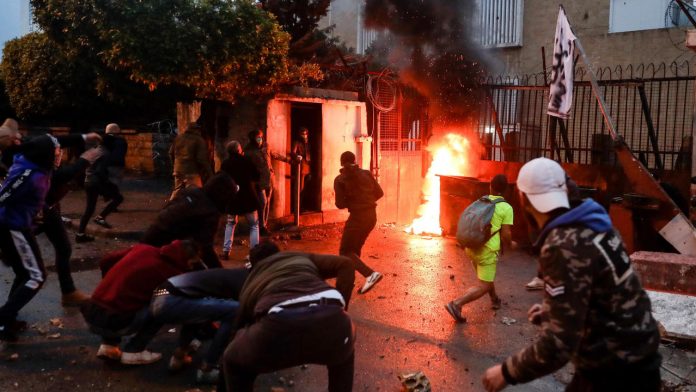 A man was killed in the Lebanese city of Tripoli on Thursday in clashes between security forces and protesters who were angry over a strict lock that has abolished livelihoods in a collapsing economy.

Omar Taybah, 30, was hit by a bullet overnight, according to a local hospital that treated him, a security source and residents. Dozens marched at his funeral during the day.

Security forces said they fired live rounds to disperse rioters who set fire to the building’s guard room and tore out a gate. The violence “led to the death of a victim,” the statement said, citing Taybah.

People flocked back to Tripoli’s main square later on Thursday.

Police fired tear gas at protesters throwing Molotov cocktails. The flames swelled over the municipality when it burned just before midnight, with plumes of gray smoke billowing out of the windows.

It was the fourth straight night of unrest in one of Lebanon’s poorest cities, after the government imposed a 24-hour curfew to slow down a COVID-19 wave that has killed more than 2,500 people.

Aid workers warn that the lock leaves the poor, now more than half of the population, with little government support.

“People are tired. There is poverty, misery, lockdown and there is no work. “Our problem is the politicians,” said Samir Agha during the overnight protest.

A currency crash has triggered fears of growing hunger. Nevertheless, Lebanese leaders have not yet launched a rescue plan or adopted reforms to unlock aid, leading to reprimands, including from foreign donors.

Human Rights Watch called for an investigation into Thursday’s death. “The government neglected the needs of the people of Tripoli and used brutal force … when they demanded a better life,” said researcher Aya Majzoub.

A young man died today due to injuries he received in tonight’s clashes in Tripoli, #Lebanon. I have no words to express shock, anger, sadness

The government neglected the needs of Tripoli’s staff and used brutal force to silence them when they dared to demand a better life. # عمر_طيبة pic.twitter.com/XBw1fmmrbr

Prime Minister Hassan Diab has said that locking in the coronavirus was necessary.

Hospitals that struggled with some of the region’s highest levels of infection were already struggling with supply shortages due to the liquidity problem.

Lebanon’s economic collapse, on a scale it has never seen before, erupted in 2019 in protest against leaders who monitored decades of state transplants.