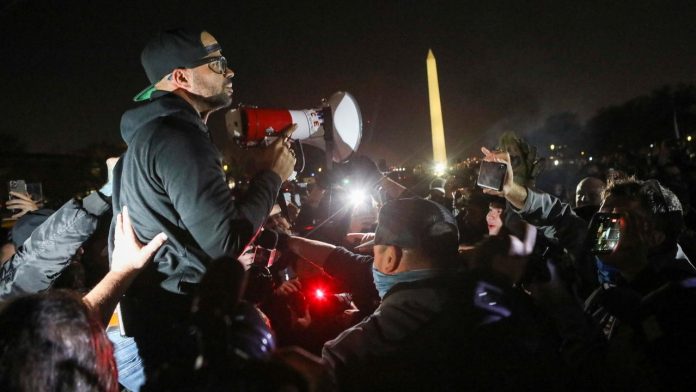 The chairman of the right-wing group Proud Boys was arrested in Washington on Monday over the torch last month by a Black Lives Matter banner from a church during violent protests, police said.

Enrique Tarrio, 36, was detained as the U.S. main support for demonstrations against the legislator’s certification this week by Joe Biden as the next US president.

Tarrio, who had just arrived in the city from Florida, was accused of destroying property at Asbury United Methodist Church, a predominantly African-American church where he and others allegedly burned the banner during violent protests on December 12.

He was further charged with having two illegal high-capacity firearms magazines when he was arrested, police said.

In a parallel court hearing revealed on Monday, Tarrio and other members of the proud boys of the historic Metropolitan AME Church, including mostly African Americans, were accused of tearing down and burning their banner during the protests last month.

“The construction of the Proud Boys in Washington, DC on December 12, 2020, was a new and dangerous chapter in the long and terrible history of white supremacist mob violence against black houses of worship,” the church said in its filing.

The arrest came before protests planned for Tuesday and Wednesday by supporters of President Donald Trump who supported his unfounded claim that he, and not Biden, won the November 3 presidential election.

Washington police said on Monday that they were concerned about potential violence, especially from groups such as the Proud Boys, and warned that people carrying firearms would be arrested.

“We do not allow people to incite violence or intimidate our residents,” said Mayor Muriel Bowser.