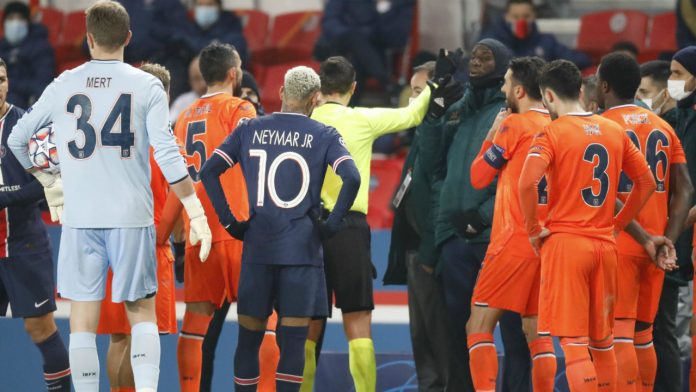 Paris Saint-Germain’s crucial Champions League match with Istanbul Basaksehir on Tuesday was suspended during the first half when the players walked away amid accusations of racism by one of the match officials.

The line broke out after Basaksehir’s assistant coach Pierre Webo, the former Cameroon international, received a red card during a hard line on the line of contact with staff from the Turkish club who appeared to accuse the Romanian fourth official of using a racist term.

Television microphones picked up a furious Webo who repeatedly asked why a racist term had been used to describe him.

The game at Parc des Princes ended in the 14th minute, with the players leaving about 10 minutes later.

Basaksehirs Senegal international striker Demba Ba, among the substitutes for the away team, could be heard recalling the official and said: “When you mention a white guy you never say ‘this white guy’, you just say ‘this guy’, so why when you mention a black guy do you say “this black guy?” “

The match, which is played behind closed doors due to the coronavirus pandemic, is crucial for PSG, who need a draw to cope with the qualification for the 16-year-old from Group H, which also includes RB Leipzig and Manchester United.