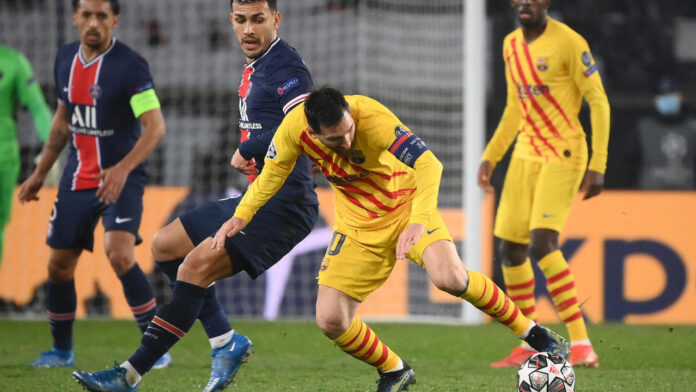 Paris St Germain buried the ghosts from their embarrassing exit in 2017 when they made it 1-1 at home to Barcelona on Wednesday to complete an overall 5-2 victory that sent them into the Champions League quarter-finals.

Four years after Barca claimed a memorable 6-1 victory to turn a 4-0 deficit in the last 16 years, PSG lacked inspiration but their 4-1 advantage from the first game in Spain was sufficient this time.

Kylian Mbappe, who scored a hat-trick at the Nou Camp, opened the scoring with a penalty towards the end of the game before Lionel Messi equalized with a fantastic long-range goal, but the Argentine was saved by Keylor Navas at half-time.

The French champions were at the back during the second half when Barca piled on the press but Barca left the competition before the semi-finals for the second year in a row.

PSG without the injured striker Neymar did not look like the team that reached last year’s final or hammered Barcelona three weeks ago, but they kept their composure at the back.

Barcelona stamped their authority early and found a place for Ousmane Dembele, but the Frenchman was twice denied by Navas and he went an effort over the crossbar in the beginning of 20 minutes.

Sergino Dest went close to Barca with a powerful angled shot that Navas deflected on his left post and Dembele broke down the left flank but his cross only avoided a sliding Messi.

However, it was PSG who continued on 31 minutes when Mbappe converted a penalty awarded after a VAR review after Clement Lenglet appeared to walk on Mauro Icardi’s heel.

Six minutes later, Messi unleashed a 25-meter missile that flew into the top corner to equalize in the style of its 120th goal in the Champions League.

The Argentine had a chance to put the visitors in front just before the break when Barca won a penalty after a Layvin Kurzawa foul on Antoine Griezmann, but Navas deflected the Argentines’ spot kick on the crossbar and away.

Ronald Koeman’s side was still over PSG in the second half and it required a desperate tackle by Marquinhos to prevent Messi from scoring from the field before Navas cleared a Sergio Busquets header.

However, Barcelona gradually ran out of steam and must now turn to their attempt to win the La Liga title, where they track the leaders Atletico Madrid with six points.