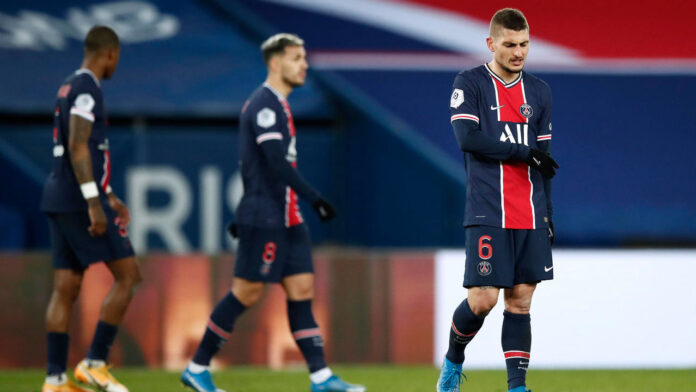 Paris St Germain missed an opportunity to move to the top of the Ligue 1 table when they suffered an embarrassing 2-1 defeat to champions Nantes on Sunday.

After their seventh league defeat of the season – the fourth at the Parc des Princes – PSG are second with 60 points from 29 matches, three behind Lille who made it 0-0 in AS Monaco as none of the top four teams won this weekend.

The result lifted relegation-threatened Nantes to 18th place on 27 points, one point below Lorient and the safety zone.

Four days after a weak display in a Champions League draw against Barcelona in the 16-year-olds, where they came out due to a big lead in the first stage, PSG fought again but Draxler opened the scoring three minutes from the break with a low shot.

Just before the hour, Nantes equalized deservedly when a bad pass by Mbappe almost put up Kolo Muani, who beat goalkeeper Keylor Navas from close range.

After a short discussion with PSG’s sports director Leonardo, coach Mauricio Pochettino replaced Angel Di Maria with Leandro Paredes after 62 minutes and went to the locker room with the Argentine before returning to the bench.

After 71 minutes, Kolo Muani put Simon ahead 2 – 0 when he rose to head in a cross from the right wing.

It finally stimulated PSG to action, but Alban Laffont made a couple of good saves to preserve Nantes’ advantage until the final whistle.

Earlier, Lille’s seven-match winning streak ended on the road when they failed to break the deadlock at Monaco in a 0-0 meeting in Louis II.

Monaco and Lille did not manage to create decent chances until Stevan Jovetic was denied by Lille goalkeeper Mike Maignan’s fantastic save in stoppage time.

Monaco are fourth on 56 points, fourth behind PSG and third-placed Olympique Lyonnais, which was held to a 1-1 draw at the Stade de Reims on Friday.