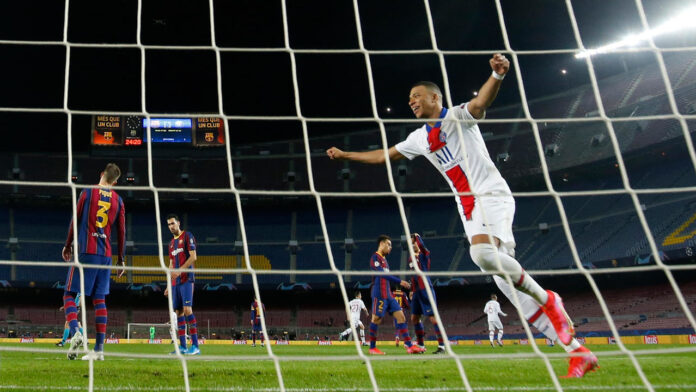 After throwing away winning positions in the recent past, most painfully in Barcelona’s “Remontada” 2017, Paris Saint-Germain will not sit on another comfortable lead when they host the same opponent in the Champions League on Wednesday.

Although PSG won the first stage 4-1 at the Nou Camp, the French champions have made it clear that they do not intend to sit back in the return match in their 16th round.

“It’s clear, we want to win and we have to attack,” PSG goalkeeper Keylor Navas told a pre-match press conference, warning of a conservative approach.

“We obviously want to qualify but we want to do it with a victory,” added PSG coach Mauricio Pochettino. “We know how to start, the key is concentration.”

Lack of concentration and complacency has cost the club dearly in the past.

PSG beat Barcelona 4-0 at home in 2017, at the same stage of the competition, then lost 6-1 away on an evening of painful humiliation, called “Remontada”.

Two years ago, PSG won 2-0 at Manchester United but slipped to a crushing 3-1 home loss when United reached the quarter-finals.

These matches saw PSG concede a goal within three minutes and again under injury.

“The past is the past. I started here in 2020, there is no history for me “, says Pochettino, who replaced Thomas Tuchel after he was fired.” I have no feelings connected to previous experiences. “

Still, Pochettino made a telling decision by keeping all the players together before the game, something teams usually do in hotels for away games.

After losing to United, Tuchel spoke of his surprise and concern about how some players arrived late to the arena for the pre-match meeting, with an air of casual behavior that did not fit the occasion.

After discussing it with his players, Pochettino takes no chances.

“The important thing is to understand what the team needs, to be together here [Tuesday] night and to prepare for this match together, says Pochettino. “Everyone agreed that this was the best.”

Despite Barca having everything to do, coach Ronald Koeman’s side is much better than three weeks ago.

Koeman sharpened the defense, switching from a 4-3-3 formation to a 3-5-2, which protects the overworked goalkeeper Marc-Andre ter Stegen with another central defender.

Barca have gone 16 unbeaten in the league and showed fighting spirit and faith in beating Sevilla 3-0 last week to reach the Copa del Rey final.

“I think they will cause us problems,” said Navas, who joined PSG from Real Madrid. “Of course they will try to introduce their game. We need to stop them from doing things that hurt us. We still have the same respect for Barcelona. We never thought we were superior. ”

Koeman is without center half Gerard Pique, who took a ligament in his right knee shortly after making an equalizer against Sevilla.

PSG, on the other hand, will be almost at full strength when they welcome winger Angel Di Maria.

But Neymar – who scored two late goals for Barca in the 2017 game – has not fully recovered from an adductor injury.

“We feel pretty sad because we were very enthusiastic about him playing,” said Pochettino. “It’s a difficult moment for him. He thought he had recovered enough to play, but he is still a few days away.”

Barca is a very changed side since the wonderful night of 2017, with Luis Suarez, Andres Iniesta and Ivan Rakitic also away.

Koeman needs to be rebuilt with young players. 18-year-old midfielder Pedro “Pedri” Gonzalez is growing in confidence to play alongside Lionel Messi, while midfielder Frenkie de Jong has won in maturity and played during a turbulent period in Barca’s history.

But as much as De Jong likes to push forward, he must turn off the influential Marco Verratti, who led the midfield in the first stage and combined excellently with hat-trick goal scorer Kylian Mbappé.