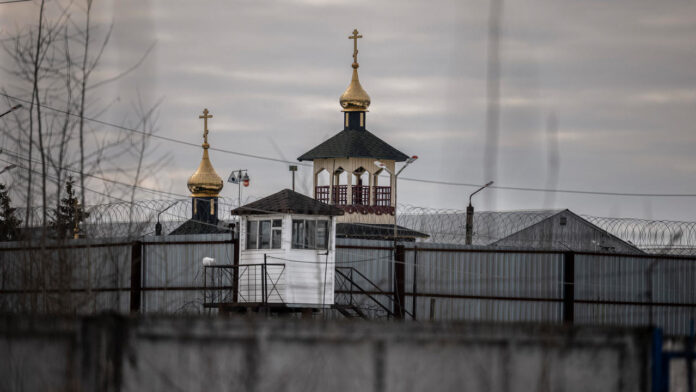 Kremlin critic Alexei Navalny, who is serving a two-and-a-half-year prison sentence in a penal colony outside Moscow, said Monday he was locked in a “real concentration camp.”

His comments were the first confirmation of widespread reports that Russian opposition politicians would spend their sentences at one of the most infamous facilities in Russia’s extensive network of more than 600 labor colonies.

“I must admit that the Russian prison system could surprise me,” Navalny posted on Instagram along with an old photo of himself with a short haircut.

“I had no idea that it was possible to organize a real concentration camp 100 km from Moscow.”

Navalny added that he was in penal colony No. 2 in the city of Pokrov in the Vladimir region northeast of Moscow with a “recently shaved head”.

On Monday, Navalny’s lawyer Olga Mikhailova confirmed that he was in the colony and said she could have visited him there, Russian news agencies reported.

In his post, Navalny wrote that “camcorders are everywhere, everyone is seen and at the slightest violation they make a report.

“I think someone upstairs read Orwell’s in 1984 and said, ‘Yeah, cool.’ Now we do. Education through dehumanization “, he added.

Woke up “every hour”

Navalny said he had not yet seen any hints of violence in the colony, but because of the “exciting attitude of the judges” he could “easily believe” previous reports of brutality.

Earlier this month, activist Konstantin Kotov, who spent nearly two years in the colony for violating protest rules, described to AFP an environment in which prisoners are not treated “like humans”.

In February, the European Court of Human Rights called on Moscow to release opposition politicians from concern for its life, a call that Russia quickly rejected.

In his Instagram post, Navalny said that at night he was awakened “every hour” by a man who snapped a photo of him and announced that the prisoner who is “prone to escape” is still in his cell.

In mid-January, the Kremlin critic was taken into police custody shortly after landing at a Moscow airport from Germany, where he had been treated for an almost fatal poisoning with the Soviet-era nerve toxin Novichok.

The anti-transplant campaign, which gained prominence for its investigations into the wealth of Russia’s elites, insists that the poisoning was carried out on the orders of Vladimir Putin.

The Kremlin has repeatedly denied the allegations, but has not yet launched a probe into the attack.

Navalny’s arrest sparked a wave of protests over Russia and a brutal police crackdown. The United States and the European Union have demanded his release.

In a concerted effort earlier this month, Washington and Brussels imposed sanctions on senior Russian officials as the US intelligence service concluded that Moscow was orchestrating the poisoning attack on Navalny.

A number of Navalny’s close allies remain under house arrest, accused of violating Moscow’s ban on massacres due to the coronavirus pandemic by demanding protests in his support.

After police arrested about 11,500 protesters at nationwide rallies held in late January and early February, Navalny’s right-hand man Leonid Volkov called for the opposition to be regrouped.

Volkov, who is based in Lithuania, told AFP last week that the team would soon announce new protests for the spring and summer ahead of important parliamentary elections in the autumn.