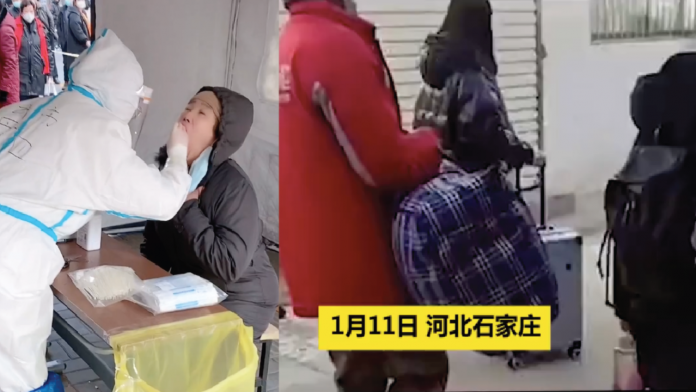 The discovery on January 2 of a cluster of coronavirus infections in Shijiazhuang, the capital of China’s northern Hebei province, has led to China’s most serious Covid-19 outbreak in five months, with 463 reported active infections in the province on January 14 and one death. . Authorities have placed the province’s three major cities, Shijiazhuang, Xingtai and Langfang, under suspension from last week. However, videos published on Chinese social media reveal different quarantine experiences, as the authorities continue with a more localized lock-in.

China: “More than 17 million people, representing 90% of the inhabitants of Shijiazhuang and Xingtai, two cities of the province of Hebei and China, were tested Friday for the coronavirus in the environment of the resurgence of COVID-19 in the province. “📹: Shijiazhuang confined. pic.twitter.com/MTQoLBbMID

This Twitter video on January 9 shows that the center of Shijiazhuang was emptied due to the city’s lockdown, which began on January 6, 2021. Flights and train services were also suspended, and all departures from the city have been banned for fear of spreading viruses to other areas. especially near Beijing.

‘This is the first time the pandemic has affected Shijiazhuang’

Da Zai, an entrepreneur who lives in Shijiazhuang and makes Douyin (the Chinese version of TikTok) videos that divide her daily life under lock and key, spoke to the JowharObservators team about her experience:

When I first heard the news that all neighborhoods would be locked, it felt very sudden. This is the first time that the pandemic has really affected Shijiazhuang. But even though it came as a shock, we felt emotionally prepared because of what had already happened in Wuhan.

Many people went to the supermarket to refill food and supplies. Since no one knows how long the lock would last, they wanted to be prepared. But as the days passed, the authorities said that they would ensure that designated staff could deliver food and other goods to us, and that other services (such as markets or restaurants) would also be available.

This January 12, Douyin shows an empty market in Langfang, another city in Hebei Province that was shut down that day due to the new Covid-19 eruption. The text reads: “Stay strong, Langfang.”

We have to go through two rounds of nucleic acid testing [a test to determine if we have Covid-19] because the virus has an incubation period of one or two weeks. The process is very well organized – they will call us by building with a megaphone, so we do not have to wait too long. I think the local authorities really learned from the lock in Wuhan.

Da Zai’s Douyin video on January 12 shows that she has to test nucleic acids for the second time.

China: Video documenting Shijiazhuang, Hebei, which launched the second series of nuclear acid tests for all residents of the city on 12 January and which will take place on signaled buses on 8 January 2021 (https: // t. co / c5roqykJLc) pic.twitter.com/oB2QRGx0Lf

– Rebecca Rambar (@RebeccaRambar) January 12, 2021 In this January 8 Twitter video, the head of a police station in Shijiazhuang shows how a city bus has been transformed into a test site for open-air nucleic acids.

In January last year, when the city of Wuhan went into lockdown during the first Covid-19 eruption, residents complained about problems getting fresh produce and other food delivered, as well as rising prices.

In Hebei, authorities have mobilized the entire province and neighboring regions to support the locked cities by providing food and other daily necessities. However, access to fresh produce and other regulations still varies from neighborhood to neighborhood, and stricter lock-in measures are being introduced in some communities based on their level of risk.

Da Zai and other volunteers who live in areas where plenty of raw materials are available help deliver food to people in these areas.

I have some friends in Douyin who live in neighborhoods that only have a small convenience store and no vegetable markets – so I help buy food for them. I can not leave my neighborhood, but the mayor announced at a press conference that suppliers can still transport goods outside the community.

Da Zai’s Douyin video on January 14 shows that she buys food for a Douyin fan in an area where locking is stricter. Other volunteers have also posted similar videos on how they transport food to different parts of Douyin.

I can not speak for other districts, but there have been no price increases here. During press conferences, the authorities have warned that price equalization should not take place and if this is the case, customers can submit complaints.

More than 22 million people are currently suspended in Hebei Province, but not everyone can be quarantined in their own homes. On January 11, Chinese state media reported that more than 20,000 residents from 12 villages in Shijiazhuang’s Gaocheng district, a high-risk area where the majority of the first cases were discovered, were evacuated to designated quarantine sites.

A video from Xianyang Daily, part of the Chinese state media, shows the relocation of more than 20,000 people from 12 villages in the Gaocheng district of Shijiazhuang on January 11 to designated quarantine sites.

An official at China’s National Health Commission stated that the centralized isolation was a preventive measure to avoid new infections between those with and without the virus in the village.

Online videos also showed that haberdasher workers disinfected the streets in the Gaocheng district before and after the relocation.

China: “Nearly all 3 3-year-olds, including more than 5,400, in the high-risk district of Gaocheng, Shijiazhuang, have been evacuated to quarantine facilities while large-scale disinfection work has taken place.” Https://t.co/xFIwMn5ArG pic.twitter.com/d6J1q0BCLQ

This January 14 news report from Xinhua, China’s state news agency, shows members of the Gaocheng Fire Brigade disinfecting the streets of a village in the district.

Shijiazhuang is also building a makeshift quarantine center in Zhengding County that will provide 3,000 homes, according to Xinhua.

A video from CCTV News on January 14 shows the construction of the quarantine center in Shijiazhuang over 500 mu mark.

Hebei is not the only province affected by the new outbreak. Heilongjiang, a northeastern province bordering Russia, has also jailed 5.2 million people in the city of Suihua after reporting 16 new locally transferred cases on January 13.

Da Zai said that although people’s personal and professional lives have been affected, they have generally followed because they believe the measures put in place by the authorities are necessary.

Of course, lockdown makes our lives more difficult, but people understand why it is necessary because of what happened in Wuhan in the past. We also want it to end quickly, so we are willing to do what is required.