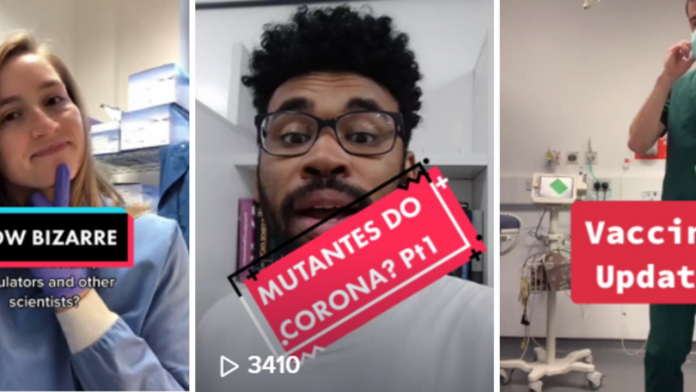 To combat misinformation, an international team of researchers has approached TikTok to answer public questions about the Covid-19 vaccine. The researchers, members of the TeamHalo initiative, hope to convince the population to get the vaccine. Rômulo Neris participates in the project from Brazil.

Were vaccines developed too fast? What are they made of? How are they tested? These are the questions that Rômulo Neris, a doctoral student in virology at the Federal University of Rio de Janeiro, is trying to answer in TikTok. In this two-part video published on December 22, he explains that vaccines should be effective despite the virus’ mutations.

In this two-part video, Rômulo Neris explains that virus mutations are usually minimal. However, when the mutation is significant, it can confuse a vaccinated person’s immune system to think it has to do with a new virus. In the second part, he pointed out that the Covid-19 variant discovered in the UK should not affect vaccines, as “large parts of the virus’ structure were used to create the vaccine, so our immune system will still be able to recognize those parts of the virus that have not altered by the mutation. “

After starting his doctorate in California, Neris returned to Brazil to work on Covid-19. In his research, he tries to understand how our immune system reacts to the virus.

He is involved in the TeamHalo project, developed in collaboration with the University of London and the UN ‘verified’ initiative to combat misinformation about Covid-19. The project brings together researchers from around the world who publish information about the virus with the hashtag #TeamHalo on TikTok, Instagram and Twitter.

Since the beginning of the pandemic, Neris has frequently used social media to inform the public about the virus:

I realized that there was a huge gap in terms of accurate information that could be understood by a non-specialized audience. So I decided to dedicate some of my time to this, for example by posting information about the virus on Twitter. That’s when TeamHalo contacted me.

From the launch, the project was looking for researchers who worked on Covid-19, but who also had good communication skills.

I decided to join the initiative because I am worried about the spread of false information, especially misinformation about health as it could lead to death in the short term. In Brazil, the president says vaccines are ineffective and even dangerous. This is a real problem. […] I think researchers need to take a seat on the Internet to share their knowledge, otherwise others will use this space to say what they want.

In this video, which has more than 14,800 likes, Rômulo Neris expresses his outrage with false information:

I’m trying to improve! In my videos, I choose to talk about hot topics or explain basic concepts in immunology. I try to convince people with facts in the simplest way. It’s hard to fit into a one minute video.

Usually filming from his lab, Neris uses his daily life as a researcher to easily explain scientific concepts. In one of his videos, for example, he showed what a cell infected with Covid-19 looks like:

Translation: “These are normal cells in the laboratory […] And these are infected cells. This is how they are. And that’s what we have to work for […] we must have a vaccine that is safe and effective. “

With more than 18,300 subscribers, his TikTok account is a great success in Brazil. However, it does not seem to reach the people most strongly opposed to the Covid-19 vaccine:

I have some examples of people who were originally afraid of the vaccine and who wrote to me to say that I had changed. I thought I would be followed by many anti-waxers, but in the end I have a large subscriber base that is for vaccination. They do not believe in incorrect information, they just want more information. On the rare occasions when people have posted anti-vaccine comments under my videos, my other followers have started discussions with them to dismiss their claims.

The issue of Covid-19 vaccines is particularly controversial in Brazil. President Jair Bolsonaro has already said he will not be vaccinated. The Brazilian population, on the other hand, has high confidence in the vaccine: Eighty percent of Brazilians are willing to be vaccinated against Covid-19, according to an Ipsos survey conducted in October.

Brazil is the world’s second most affected country after the United States, with more than 187,000 deaths from Covid-19 since the pandemic began.