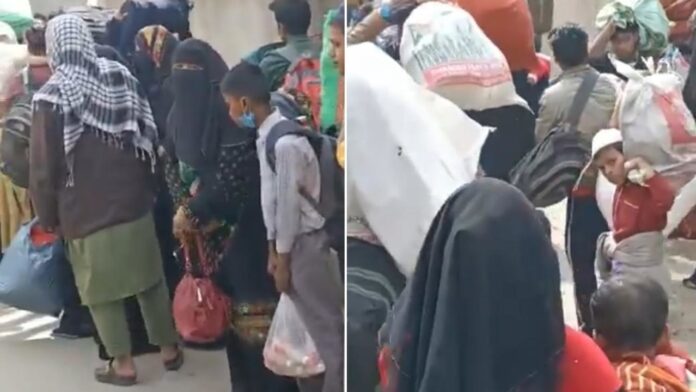 At least 168 Rohingya refugees have been detained since March 6 in the Jammu and Kashmir regions of northwestern India. Local authorities have threatened to send this persecuted Muslim minority back to Myanmar, which has been engulfed in chaos since a February 1 military coup. They claim that these refugees do not have valid residence permits, even though many of them are stateless and carry refugee cards provided by the UN. Videos posted on social media show refugees loaded with their belongings, fleeing Jammu.

Pictures online show people carrying a lot of suitcases and colorful bundles while flying camp in Jammu. One of the films was shot on March 7 by a member of the Rohingya Human Rights Initiative, a non-governmental organization in New Delhi that works to settle and integrate Rohingya refugees in India and Bangladesh.

Distressed Rohingya refugees in Jammu say they are fleeing their camps for fear of being detained. In the pictures from this morning, society claims that the authorities are looting their protection and detaining more people. Earlier yesterday, about 155 refugees, including children, women, were detained and sent to detention centers after a verification by authorities where refugees were asked to fill out a form and undergo biometrics. Some refugees say their family members were separated.

This video, posted on Facebook on March 7, was filmed by a member of the Rohingya community in India.

On March 6, police checked documents from a number of Rohingya refugees before transferring them to a detention center near Hiranagar. The inspector general of the local police, Mukesh Singh, told the news agency Agence France Press (AFP) that the information collected from these checks would be shared with Myanmar, where these refugees would be deported.

Ali Johar is co-director of the Rohingya Human Rights Initiative NGO. He told Jowharobserver teams that the authorities did not accept the refugee cards provided by the United Nations High Commissioner for Refugees (UNHCR).

Authorities said these refugees did not have valid documents. But most of them had refugee cards, provided by the UNHCR. However, local officials claimed that since India had not signed the 1951 Convention on Refugee Status, they were not obliged to provide asylum to people fleeing violence. Rohingya refugees do not have Myanmar passports [Editor’s note: because they are considered stateless in Myanmar], but after their arrival in India, they were granted refugee status by the UN.

In a panic, hundreds of refugees feared being arrested in the refugee camps where they lived, some of them for several years. Some families who did not know where to go hid in the forest, as shown in this video published on March 8 on the Rohingya Human Rights Initiative Facebook page:

Distressed refugees in Jammu and Kashmir

After more than 155 refugees were detained last Saturday, members of Rohingya refugees in Jammu and Kashmir can be seen hiding in the jungle for fear of being imprisoned and deported. Translation: Sudden difficult situation occurred on us. Yesterday, some of our employees were arrested after they were called for verification, we have no communication / information with them. All of a sudden, the police and other authorities started deploying in our camps and forced us to board the buses. In desperation, we are now hiding in the jungle with our young children, the elderly and the disabled in serious condition. Children and toddlers cry for food. And we need your urgent help and prayers.

According to the Rohingya Human Rights Initiative, a number of refugees fled when they still had no word from their friends and family who had been taken in for questioning by police the day before.

Jowharobservers interviewed 42-year-old Abdul Rohim, who works at the NGO Save the Children and has lived in the Rohingya refugee camp since May 2014.

They placed my eldest son and his wife in the Hiranagar Detention Center, as well as some of my in-laws. They were arrested at Jammu Arena after police checks, although they had all the necessary documents.

My family has refugee cards provided by the United Nations High Commissioner for Refugees (UNHCR), but they were still arrested.

I have not seen my family or been able to talk to them since they were arrested. I do not know what conditions they live in or what they must eat.

Abdul Rohim decided to stay in Jammu, but he also lives in fear of being arrested:

Ali Johar of the Rohingya Human Rights Initiative explains that anti-migratory rhetoric in India has increased in recent years.

Local media have created hatred towards Rohingya and used derogatory words for them as “insects” or “criminals” or described them as “a threat to India”. This hatred has infected the locals in Jammu since 2017.

He says the UNHCR has not been as present for Rohingya refugees since the start of the Covid-19 pandemic:

The UNHCR has conducted some of its operations remotely due to the Covid-19 pandemic, making it much more difficult to care for Rohingya refugees and ensure that their refugee cards are renewed.

The Jammu and Kashmir regions have also experienced long periods of internet outages [Editor’s note: since 2019], so how can HCR and Indian authorities expect refugees to renew their refugee cards online?

While Indian authorities have said they have already begun the deportation process, Ali Johar fears that the refugees will be detained long before India and Myanmar agree. A group of seven Rohingya refugees deported to Myanmar in October 2018 had spent six years in custody in the Assam state of India.

The representative of the UN High Commissioner for Human Rights (OHCHR) met with authorities from Jammu and the Kashmir region on 11 March.

This wave of arrests follows a demand from Jammu and Kashmir High Court on 13 February. The court asked territorial officials within a month to show that they had taken steps to identify refugees from Myanmar and Bangladesh in the region.

The nationalist government of Prime Minister Narendra Modi, which has adopted a growing number of anti-Muslim measures, has demanded that the 40,000 Rohingya living in India be identified and deported since 2017.

Human Rights Watch has called on the Indian government to refrain from deporting Rohingya to Myanmar, where the ruling military junta may well expose them to violence and oppression. NGOs call on India to respect the principle of non-refoulement, which guarantees that no one will be returned to a country where they are subjected to torture, cruel, inhuman or degrading treatment.

Nearly one million Rohingya have fled Myanmar, most of them after a bloody persecution campaign by Myanmar’s army in 2017.

Written with the help of Adil Bhat in New Delhi for FRANCE 24.