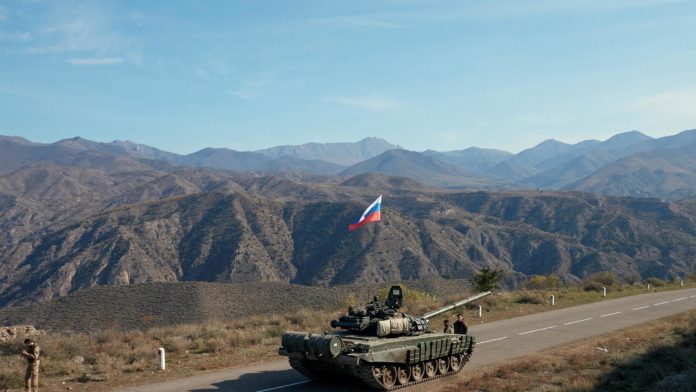 Russian peacekeepers deployed to Nagorno-Karabakh on Tuesday during an agreement that halted six weeks of fighting between Azerbaijani and ethnic Armenian forces and locked in Azerbaijan’s territorial gains.

The agreement was celebrated as a victory in Azerbaijan, while in Armenia it sparked unrest from crowds that stormed government buildings and branded the deal a betrayal.

It terminates military action and restores relative calm to the breakaway territory, internationally recognized as part of Azerbaijan but populated and until recently completely controlled by ethnic Armenians.

Azerbaijan will retain the territory it captures, including the second largest city of Shusha, which the Armenians call Shushi. Ethnic Armenian forces must relinquish control of a number of other areas by 1 December.

Russian President Vladimir Putin said the deal, which was announced overnight and also signed by Moscow, should pave the way for a lasting political settlement for battles that killed thousands, displaced many more and threatened to trigger a wider war.

Azerbaijan had sought to regain land lost during a war in the 1990s. Azeris celebrated in the capital Baku, ringing car and bus horns in joy and cheering and waving the Azeri national flag.

Armenian Prime Minister Nikol Pashinyan denied Armenia had suffered a defeat but acknowledged a “disaster” for which he took personal responsibility.

Riots broke out in Yerevan, the capital of Armenia, where crowds stormed and looted government buildings overnight, calling the deal a betrayal. Some protesters called on Pashinyan to quit, a demand that was later repeated by 17 political parties, while a petition was launched demanding that the agreement be annulled.

Despite the celebrations in Baku, some Azeris regretted that Azerbaijan had stopped fighting before conquering all of Nagorno-Karabakh and were wary of the arrival of Russian peacekeepers, who dominated the region during the Soviet era.

“We were on our way to get the whole of Nagorno-Karabakh back,” said 52-year-old Kiamala Aliyeva. “The agreement is very vague. I do not trust Armenia and I do not trust Russia even more.”

Since the fighting erupted on September 27, Azerbaijan says it has recaptured much of the country in and around Nagorno-Karabakh that it lost in a 1991-94 war in which some 30,000 people were killed.

Capturing Shusha, or Shushi, seems to have been a turning point. Located on a mountaintop above Stepanakert, Nagorno-Karabakh’s largest city, it gave Azerbaijan’s forces a commander to launch an attack from.

Three previous ceasefires had failed and Nagorno-Karabakh leader Arayik Harutyunyan said there was no choice but to conclude a peace agreement because of the risk of losing the entire enclave to Azerbaijan.

Pashinyan said he had signed the peace deal under pressure from his own army.

Fighting broke out between Armenian and Azerbaijani forces over the disputed Nagorno-Karabakh separatist region on September 27. © France24 / Graphic Studio

Arms supplies and diplomatic support from Turkey, a close ally, helped give Azerbaijan the upper hand in the conflict, and Ankara used it to show its growing international strength and often put it at odds with its NATO allies and Moscow.

For Russia, which has a defense pact with Armenia and a military base there, the deal is a sign that it is still the most important judge in the energy-producing South Caucasus, which it sees as its own backyard.

Turkish President Recep Tayyip Erdogan praised the deal in a phone call to Putin, saying Turkey would set up a center for a ceasefire with Russia, in a place “in the countries liberated from Armenian occupation.”

The Kremlin said the two leaders had emphasized the importance of close cooperation to ensure the implementation of the agreement.

On Tuesday, French President Emmanuel Macron called for a “lasting political solution” to the conflict and called on Turkey to “end its provocations”.

France, home to a large Armenian population, has repeatedly crossed swords with Turkey on a number of issues, including Nagorno-Karabakh.

The French presidency said it was studying the parameters of the Russian-mediated ceasefire and added that a long-term agreement would also “preserve Armenia’s interests”.

Macron’s office quoted him as saying that “efforts should be made” without delay “to seek a” lasting political solution to the conflict that will enable the Armenian people of Nagorno-Karabakh to remain in good standing and return tens of thousands of people who have moved their homes “.

Earlier in the day, Putin said displaced people could return to Nagorno-Karabakh and prisoners of war would be exchanged.

A Kremlin spokesman said there was no agreement on deploying Turkish peacekeepers in the disputed region, but that the Turkish military would help staff a joint monitoring center with Russian forces.

Russian peacekeepers will stay for at least five years and expand Moscow’s military footprint in the region. Putin said they would be deployed along the front line in Nagorno-Karabakh and in a corridor between the region and Armenia.

Nearly 2,000 military personnel, 90 armored personnel carriers and 380 vehicles and pieces of other hardware were deployed, the Russian Defense Ministry said.

Russian media said 20 military planes had taken off for the region and had begun arriving in Armenia en route to Nagorno-Karabakh.