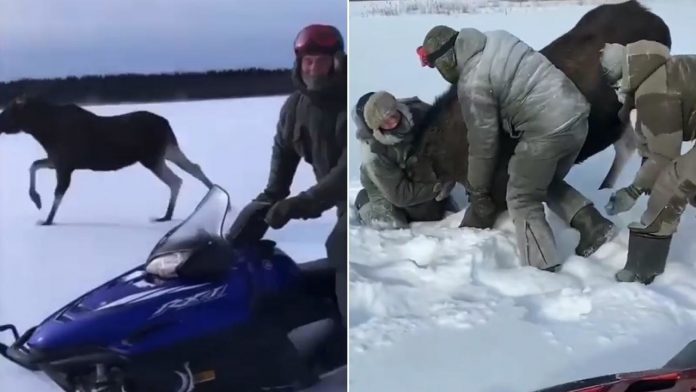 Four people driving snowmobiles chased a moose on February 23 in the Vologda region of northwestern Russia. The men then threw themselves at the exhausted moose, strangled it and killed it. The poachers published their own videos of the hunt on Instagram, although moose hunting with these methods at this time of year is banned in Russia.

The video of moose death was published on Instagram on February 24 by Alexey Sedoy, who runs a nature reserve in the Moscow region. The video was originally published by one of the people involved in the hunt. The video shows three men in the middle of a snowy landscape trying to hold down a moose with its body weight. The video is disturbing, so we have only published screenshots.

In the legend of the publication, Alexey Sedoy announces the actions of the alleged burglars and invites the witnesses to alert the police. © Instagram

“I can not watch it,” says the woman who records the video.

“Do you have a knife?” asks the man on the left.

The man with a red mask on his forehead says, “No, he dies all by himself. Can you check if there are any people nearby? ”

“I’m going to cry,” the woman says as she continues filming.

Another video, filmed earlier and published by blogger Gleb Kornilov on February 28, shows the man in the red mask chasing the elk down on his snowmobile. “I’ve never had such a weekend!” it says on the screen.

Blogger Gleb Kornilov says in the caption that this video comes from an Instagram story shared by one of the people who participated in the illegal hunt.

‘Those responsible should be punished as an example for other poachers’

The JowharObserver team spoke to Alexey Sedoy, who said he published the video in an effort to raise awareness about poaching.

I think that these situations should be investigated in public and those responsible should be punished as an example for other poachers.

Nothing about this is right. First of all, moose hunting is forbidden at this time of year. Secondly, snowmobiling is illegal. Third, what you see here is not hunting. It’s poaching and it’s cruelty to animals. They chased the animal until he was exhausted. And when he lost all energy, they threw themselves on him. The moose had no chance.

In Russia, moose hunting is only allowed between September and January and you also need a permit during the hunting season. It is forbidden to use any kind of vehicle.

The suspected poachers shown in the video were arrested on February 28. On March 2, an investigation was launched into illegal hunting. They could be sentenced to up to five years in prison and fined one million rubles (about 11,000 euros). The Committee of Inquiry released a video showing investigators visiting the site:

This video was published by the investigative committee in the Tver region on the social media network Vkontakte on March 2, 2021.

More than 50,000 cases of poaching were registered in Russia in 2019. Moose are mostly hunted for their meat, which is sometimes sold online. Vladimir Krever, director of the Biodiversity Conservation Program at the World Wildlife Foundation Russia, told Russian media Izvestia that the main reason for poaching in Russia is socio-economic – some people hunt illegally to put food on the table.