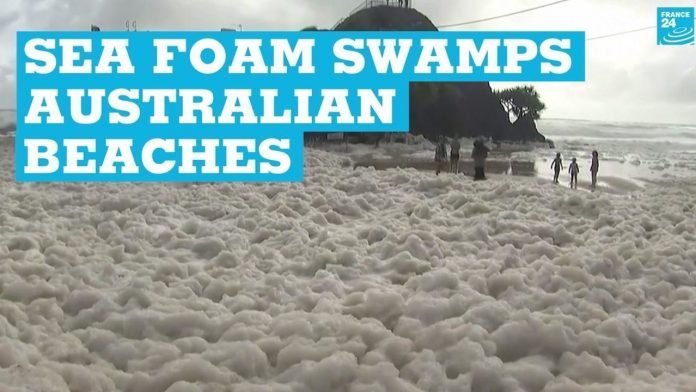 The famous beaches of Australia’s Gold Coast became in some places almost invisible by large amounts of thick sea foam during a second day on Tuesday. The foam is a naturally occurring phenomenon but has appeared in larger quantities than usual in another extreme weather in the country.

Some children and families went to beaches on Australia’s east coast to witness the unusual event and even play in the bubbles.

“People get quite worried when they see sea foam. But sea foam is largely protein that comes from degrading organic matter in the oceans and it would largely be plankton, algae, some fungus, some bacteria and when it breaks down. It forms something. similar to the surfactants or foaming agents we see in soap, says Professor Jodie Rummer from James Cook University to Reuters.

“By and large, these naturally occurring sea foam events are not harmful and are part of a natural cycle.”

But while the foam itself may not be something to worry about, it has been crushed by the recent extreme weather to beat Australia.

An intense low-pressure system has triggered cyclone conditions off the east coast in recent days with heavy rains, strong winds and high seas swallowing entire beaches, including the main beach at the popular tourist resort of Byron Bay.

It comes just a few weeks after nearby Fraser Island was evacuated due to bushfires and scientists have attributed the irregular conditions to the impact of the weather pattern in La Nina in combination with the long-term effects of climate change.

“Well, what we have here is another event. An extreme weather event that comes on the back of climate change that our society has to deal with. It is the fourth or fifth major event in recent years,” Simon Richardson, Mayor of Byron Shire, told Reuters.

“Right now around Byron we have some difficult weather, massive swellings, we see our beach disappear.”