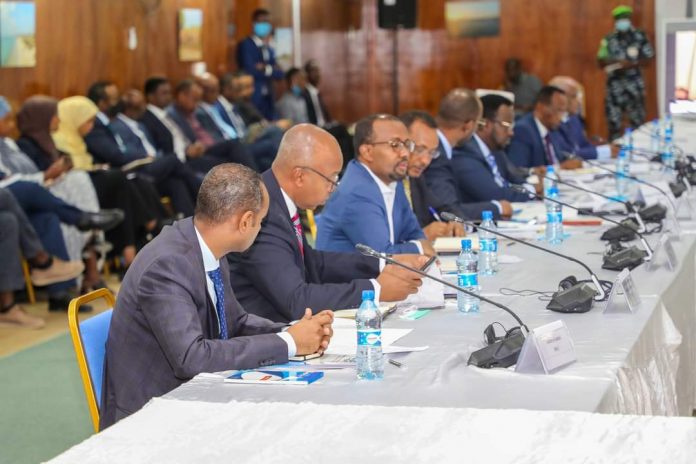 1.Senior representatives from the Federal Government of Somalia (FGS), Federal Member States (FMS) representatives, and international partners met in Mogadishu on 1st December 2020 for a Security and Justice Committee (SJC) (“the Committee”) meeting.

The meeting was Chaired by H.E. Federal Government of Somalia (FGS) Prime Minister, Mohamed Hussein Roble, who expressed his gratitude to all representatives for their efforts to advance security and rule of law in Somalia.

2. Participants expressed gratitude to Somalia’s Security Forces and the African Union Mission in Somalia (AMISOM) for their fight against Al-Shabaab, and the sacrifices made by its men and women in order to bring enduring peace and prosperity to Somalia. The Committee expressed its condolences at the loss of innocent lives as a result of the continued attacks by Al-Shabaab and other non-state actors, and condemned all attacks, including the use of improvised explosive devices, targeting civilians, Somali and international security forces.

3. The FGS reaffirmed its commitment to degrade al-Shabaab and disrupt their finance, movement and capabilities. Participants welcomed progress made thus far in securing locations in Lower Shabelle and called for greater joint, inclusive, and integrated planning for subsequent operations between rule of law, stabilisation and security stakeholders. It also stressed the need for non-military efforts to counter al-Shabaab, including tackling its access to illicit finance and weapons.

The Committee also welcomed progress made to date on Somalia’s ongoing revision of the Somali Transition Plan, a guiding strategic document for transferring security responsibilities from AMISOM to the Somali Security Forces. International partners noted the importance of political commitment and coordination by FGS and FMS leaders, as called for in Somalia’s National Security Architecture, to ensure political will and buy-in to deliver the STP across the security, rule of law, development and governance sectors.

4. The Committee recognised the importance of security sector reforms and commitments made under the Somali Transition Plan and the National Security Architecture, to ensure affordable, acceptable, accountable and able security and rule of law institutions at the Federal and FMS levels. It reaffirmed the role of the SJC to provide political guidance and oversight for security and justice sectors reform.

5. The Committee welcomed the revised STP’s aims to further enhance the existing coordination mechanisms through the establishment of a Strategic Steering Committee which aims to provide the highest level of joint political and strategic decision making led by the President at the Federal and State levels for the implementation of the STP activities. The Strategic Steering Committee will provide National political guidance to the Security and Justice Committee for the STP related activities as well as review the STP tasks, priorities and objectives of the STP by the end of 2022.

6. Stakeholders stressed the need for FGS and FMS coordination, and emphasis on force generation and organization, particularly for military, federal police and state police services, specifically hold forces. The Committee further welcomed greater FGS and FMS cooperation and international partner coordination to effectively train, organize, and equip the Somali security forces, and noted the urgent need to agree a politically inclusive model for the generation of hold forces required to allow transition.

In this regard, it was agreed that the Somali Security Forces and AMISOM would conduct a joint Concept of Operations (CONOPS) in early 2021, with a Force Generation Conference convened by the end of January to consider military, federal police and state police services and resources required, including agreed approaches to developing counter- improvised explosive devices (C-IED) and logistics capabilities.

The Committee also welcomed the briefing by the Galmudug Minister of Internal Security on the recent success of Galmudug security forces and the civilian population in defeating an Al Shabaab attack in Bacaadweyn, thereby demonstrating the commitment of Somalis to counter acts of terrorism.

7. The Committee recognized the need to finalize and implement an inclusive consensus-based Justice and Corrections Model, cementing the independence of the judiciary and separation of powers, while providing basic justice chain services in police, justice and corrections with a particular focus on the most vulnerable persons in society

8. The Committee encouraged the revision of Somalia’s national strategy to encapsulate the development of the Amnesty Law and the National Defection and Rehabilitation Program. The Committee emphasised the importance of coordination and timely joint planning between security, justice, and stabilisation stakeholders to create the necessary conditions for stabilisation of recovered areas.

9. The Committee noted the agreement reached on the electoral model for the upcoming federal elections, and encouraged further progress on agreeing and implementing an effective electoral security plan as soon as possible to ensure timely elections.

10. The Committee underscored the importance of greater transparency and accountability for public resources, and reiterated the need for closer coordination to maximize international assistance to the Somali-led security and justice sectors at federal and state levels.

11. The Committee confirmed the Security and Justice Committee meeting will be held on a quarterly basis, with the next meeting in March 2021, to assess progress, address challenges encountered, strengthen coordination and provide strategic guidance to the Somali led and international partner supported Strands.

12. This communique was adopted by the Committee in Mogadishu on 1 December 2020.