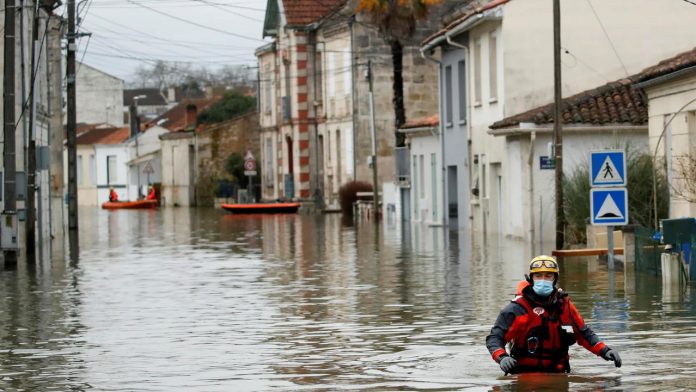 Southwest France was hit by heavy flooding on Monday after days of heavy rain, and several other regions, including eastern Paris, were prepared for floods ahead of a cold expected later this week.

The worst flooding was in Saintes, 115 km north of Bordeaux, where the river Charente was at an almost record level of 6.20 meters (20 feet). The water was at the waist on several streets and knee-deep in large parts of the city.

Hundreds of people were evacuated when water seeping into basements knocked out the power supply. Local authorities laid rays on ash blocks so residents could walk from flooded houses to dry land.

“We knew this was in a flood zone, but not that the area could be flooded up to this point, otherwise we would never have taken this apartment,” said Saintes resident Cyril Cheransac, who had to leave the apartment where he lived in smaller than one year.

Fire Chief Pascal Leprince said his services had evacuated about 400 people in Saintes and he estimated that up to 800 people had left their houses on their own.

Southeast of Bordeaux, where the Garonne river flooded large areas between Marmande and La Reole last week, floodwaters sank, but Charente water was not expected to fall until Wednesday.

“We are at a peak level now. We expect the water level to rise a little more in the coming days and to decline from the middle of the week,” a spokeswoman for Charente-Maritime said.

The town of Cognac, the center of cognac production on the river Charente, also saw several streets flooded.

France Meteo’s weather service put seven departments on alert for floods on Monday, including the Charente-Maritime, two areas along the Loire River, the Somme and Oise regions of northern France and the Seine-et-Marne region east of Paris.

In Paris, parts of quays on the river Seine have been inaccessible for several days after the river broke its banks, but the water level, at 4.35 meters on Monday morning, remained well below the latest heights of 5.88 meters seen in January 2018 and 6 , 10 meters in June 2016.

Along the Marne River, which flows into the Seine on the east coast of the main coast, the river broke its banks in several cities, especially in Conde-Sainte-Libaire and Esbly, where several streets were flooded.