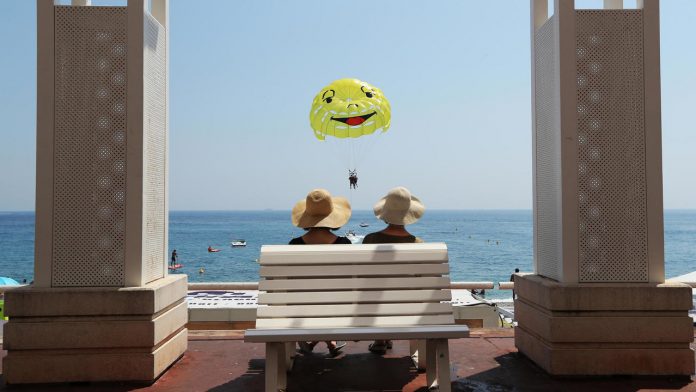 The dream house in the south of France that so many people are fantasizing about will be uncomfortably hot in the coming decades, according to new climate changes on Monday by the country’s national weather service.

Although humanity manages to moderately reduce greenhouse gas emissions – which so far has only happened during a raging pandemic or a global recession – France as a whole is warming almost three degrees Celsius above pre-industrial levels around 2070, Meteo France said in a report.

And if carbon dioxide pollution continues unabated, average annual temperatures across the country, by the turn of the century, will hover 4.5C beyond this benchmark.

It is a boundary for an inexperienced world, a number of climate studies show.

With just over 1 ° C warming so far, the planet has seen a sharp crescendo in deadly extreme weather, including heat waves and megastorms that became more destructive by rising seas.

The Paris Climate Treaty of 2015 set a goal of limiting global warming to below 2C and, if possible, 1.5C.

Previous climate models have predicted that France and the Mediterranean will be hit particularly hard by heat waves along with declining rainfall, and that reality has begun to bite.

In the summer of 2019, temperatures in the picturesque wine country north of the coastal town of Montpellier reached a sizzling 46C, a national record. Paris was just a few degrees cooler.

This and other heat waves “were a direct result of climate change,” Meteo France CEO Virginie Schwarz said in a statement.

“All observations around the world confirm an unparalleled acceleration of climate change.”

The 100-page report examined how three different carbon dioxide pollutants could shape France’s climate future: a drastic reduction in carbon dioxide pollution combined with large-scale removal of carbon dioxide from the air. a ruthless reinforcement of the use of fossil fuels that caused the problem to begin with; and a path somewhere between these increasingly unlikely extremes.

Meteo France climatologists, at the forefront of global climate science, also zoomed in with an unmatched resolution of 10 square kilometers, making it possible to distinguish climate micro-regions.

Global projections, on the other hand, divide the planet into pieces 10 to 15 times that size.

In the middle of the road the greenhouse gas emission scenario, known as RCP4.5, comes another 10 to 15 days of extreme heat per year towards the end of the century. Drying periods will increase by about 30 percent.

In the worst case – which researchers can not rule out – the south of France may experience one or two months of continuous heat waves in 2100.

Eight consecutive days with weather above 40 ° C in 2003 caused at least 15,000 heat-related deaths in France, especially among the elderly.

The new report says that high mountain regions will see the most dramatic temperature rise, up to 6C or 7C above levels at the beginning of this century.

Even in the less difficult RCP4.5 forecasts, the number of days with at least half a meter of fresh snow will decrease by half in the Pyrenees and southern Alps, which shortens ski seasons in both mountain ranges.