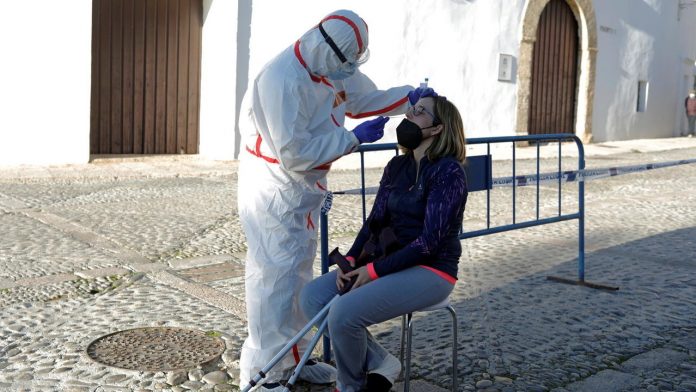 Spain’s death toll from Covid – 19 rose by 513 on Friday to 58,319, one of the highest increases in a day since the first wave of the pandemic, according to data from the Ministry of Health.

And hospital pressure continued to rise, with 44% of all intensive care beds occupied by Covid-19 patients.

In another alarming sign, the Madrid region on Friday reported an outbreak in a nursing home that has caused eleven deaths and infected all of its 48 residents and 17 employees.

The newspaper El Pais said that the home, in the mountains near the capital, had escaped the deadly first wave that tore through nursing homes across Spain in March and April last year.

Meanwhile, doctors complained about the recent delays in vaccine deliveries, forcing several regions, including Madrid, to stop vaccinating new people from priority groups, such as doctors, and only give other shots to those who have already received a first dose.

“The inability … to deliver the necessary doses at the required rate has been a crushing blow, at least for health workers,” said Javier Marco, medical director of Madrid’s Isabel Zendal Hospital, adding that they once again felt unprotected and “overwhelmed by the pandemic”. unknown time “.

European countries are struggling with broad vaccine delays, at least temporarily, as all Western vaccine manufacturers with approved shots – Moderna, Pfizer and its German partners BioNtech and AstraZeneca – fall behind their original delivery targets.

“We have been under enormous pressure since March, with very poor living conditions, fearing that we could infect our families at any time,” Marco said. “What keeps us going is the need society has for us.”