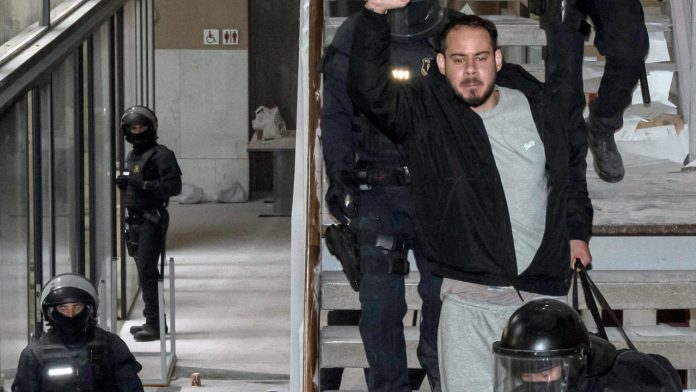 Spanish police clashed with protesters in Madrid and Barcelona on Wednesday night, when new riots broke out across the country over the jail of a rapper for tweets insulting the police and the monarchy.

Masked protesters threw bottles at police who accused them of clashes that lasted for several hours, AFP journalists say.

Madrid police said 14 people were arrested, and the rescue service reported that nine people were slightly injured in the riot.

The city’s Conservative mayor Jose Luis Martinez-Almeida condemned the incident, tweeting: “The violent and those who do not accept the rules have no place in our society.”

In Barcelona, ​​clashes broke out between officers and protesters after heavy clashes on Tuesday night, with protesters lobbing objects at police and burning homemade barricades.

Officials responded by using foam balls and charging the meetings, with police later tweeting that 29 people had been detained.

Violent protests were reported in Lleida – the rapper’s hometown and where he was arrested – as well as in the cities of Gerona and Tarragona, Catalonia police also tweeted Mossos d’Esquadra.

It follows the arrest of at least 15 people after violent rallies in Barcelona and other cities in northern Catalonia on Tuesday.

This follows after the police storm a university campus in the Catalan city of Lleida to arrest Hasel.

“They will never make us give in despite the repression,” he shouted after he was escorted from the facility where he had been punched.

Hasel missed a deadline last Friday to surrender to the police and start serving a nine-month prison sentence announced in 2018.

It was a series of tweets that called former King Juan Carlos I a mafia boss and accused the police of torturing and killing protesters and migrants.

Hasel is known for his harsh leftist views, but his case has become known among fighters who say that prosecution is a dangerous attack on freedom of expression.

His verdict caused outrage in Spain, with stars including filmmaker Pedro Almodovar and Hollywood actor Javier Bardem expressing support for his cause.

Amnesty International condemned the move, saying capturing the rapper for lyrics and tweets was “unfair and disproportionate”.

Pablo Hasél’s imprisonment is an excessive and disproportionate restriction on his freedom of expression, but he is not alone in suffering the consequences of unfair laws. https://t.co/eN2rr75lyc

The Socialist-led government has announced that it is trying to make the freedom of expression legislation less restrictive, with Podemos, the younger coalition partner, saying on Tuesday that it would apologize to the rapper.

Hasel’s case repeats it for another rapper, Valtonyc, who fled to Belgium in 2018 after being convicted of similar crimes.

Spain wants him extradited but Belgium has refused because his crime is not a crime under Belgian law.

Valtonyc told AFP that he felt “ashamed” and “angry about seeing a colleague treated like this for doing what artists do, which is to provoke”.