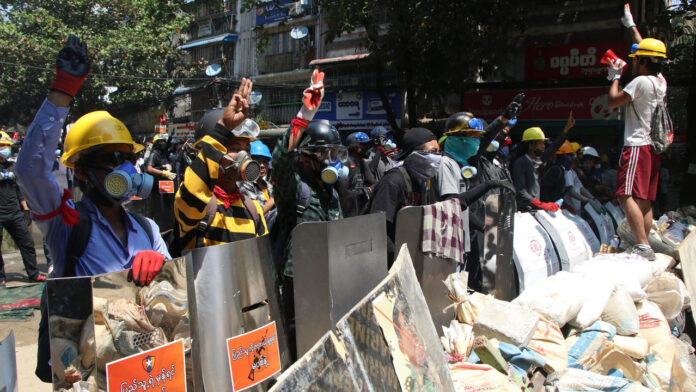 Two protesters were killed by gunfire in Myanmar on Monday, witnesses said, while shops, factories and banks were closed in the capital Yangon as part of the uprising against the country’s military rulers.

Photos posted on Facebook showed the bodies of two men lying on the street in the northern city of Myitkyina. Witnesses said they took part in a protest when police fired stun grenades and tear gas. Several people were then hit by shots from nearby buildings.

A witness, who said he helped move the bodies, told Reuters that two people were shot in the head and died on the spot. Three people were injured.

“How inhuman to kill unarmed civilians,” said the witness, a 20-year-old man. “We must have our right to protest peacefully.”

It was not immediately clear who fired the protesters even though both police and military were at the protest, witnesses said.

Police and the military has killed more than 50 people to suppress the daily demonstrations, and strikes against the hive February 1, according to the UN last week.

Crowds protesting against the coup gathered in Yangon, as well as the second largest city, Mandalay and several other cities, according to videos posted on Facebook. Protesters in Dawei, a coastal city in the south, were protected by the Karen National Union, an ethnic armed group that waged a protracted war with the military.

Protesters waved flags shaped from htamain (women’s sarongs) in some places or hung them on lines across the street to mark International Women’s Day while condemning the junta. Going under women’s sarongs is traditionally considered bad luck for men and tends to slow down the police and soldiers.

State media said security forces were present at hospitals and universities as part of efforts to enforce the law.

At least nine unions covering sectors including construction, agriculture and manufacturing have called on “all the people of Myanmar” to stop working to reverse the coup and restore Aung San Suu Kyi’s elected government.

Allowing business and economic activity to continue would help the military “as they suppress energy from the Myanmar people,” the unions said in a statement.

“The time has come to take action to defend our democracy.”

Only a few tea shops were open in Yangon, witnesses said. Large shopping centers were closed and no work was going on in the factories.

Protest leader Maung Saungkha on Facebook urged women to come out strongly against the coup on Monday, while Nay Chi, one of the organizers of the sarong movement, described the women as “revolutionaries”.

“Our people are unarmed but wise. They are trying to rule with fear, but we will fight that fear,” she told Reuters.

In a statement on Monday, the military said it had arrested 41 people the previous day.

Ba Myo Thein, a deposed lawmaker, said reports of bruises on Khin Maung Latt’s head and body raised suspicions that he had been “severely tortured”.

Police in Yangon’s Pabedan district, where Khin Maung Latt was arrested on Saturday night, declined to comment. A military spokesman did not respond to calls for comment.

The army has said they are handling the protests legally.

Figures from the Assistance Association for Political Prisoners group show that almost 1,800 people have been detained during the junta as of Sunday.

A military statement issued on the front page of state-run Global New Light of Myanmar on Monday threatened unspecified “action” against anyone working directly or indirectly for a committee of vulnerable lawmakers who have declared the country’s legitimate authority.

The announcement said the committee was illegal and had committed “high treason”. A separate report says the military and police “maintain” hospitals and universities.

The killings have angered the West and have been condemned by most democracies in Asia.

The United States and some other Western nations have imposed limited sanctions on the junta and Australia on Sunday cut defense ties, saying they would only deal with non-governmental groups in Myanmar.

Myanmar’s giant China said on Sunday that it was prepared to work with “all parties” to ease the crisis and did not take sides.