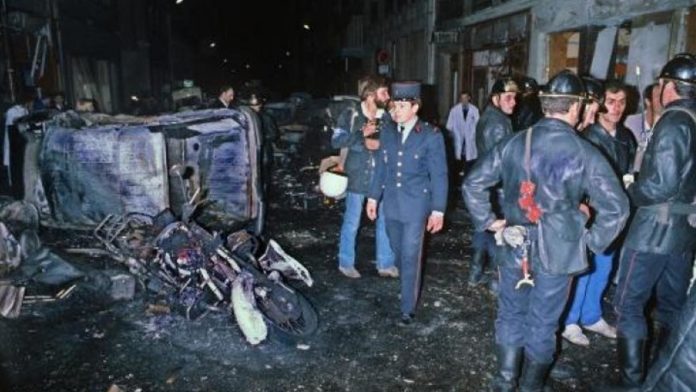 A French appeals board ruled on Wednesday that the only suspect in the 1980 bombing of a synagogue in Paris must stand trial, more than forty years after the attack.

On the evening of October 3, 1980, as Jews were celebrating the last day of the Simha Torah Festival (“Celebration of the Torah”), a bomb exploded outside a synagogue in a rich city in western Paris.

The force of the explosion on Copernic Street set fire to shops, tore a crater on the sidewalk and shook cars, killing four people and injuring 40 others.

Inside the synagogue, the glass roof fell and the front door exploded.

It was the first deadly attack on the French Jewish community since the Nazi occupation of France during World War II.

Still, it could have been much worse. The bomber struck shortly before noon in front of a synagogue.

Five children held their batmitzvah that evening and the synagogue was packed. But the service continued longer than planned and averted a worse carnage outside the building.

“I remember the explosion and the roof letting go of us,” recalled Corinne Adler, who celebrated her bat mitzvah that day. “My father said” It’s a bomb! We have to get out “”

Forty years later, Adler stood outside the courtroom in Paris, hopeful after hearing that Canadian academic Hassan Diab, 67, the only suspect in the bombing, would be brought to justice.

“I have been hoping for a trial for several years. I believed in the case but so many said it would never happen that I almost started to lose faith, says Adler to FRANCE 24.

First, the inquiry made rapid progress. Within minutes, the bomb – 10 kilograms of explosives, filled with nails that tore through the victims’ necks, brains and vital organs – was traced to a bag on a motorcycle parked outside the synagogue.

False ID used by the suspect who bought the motorcycle led the police to his hotel. Witnesses, including a prostitute and a police investigator who briefly detained him for shoplifting, helped police produce photographic equipment.

But police also threw away a dozen cigarette butts smoked by the alleged killer and did not realize they could one day be used to test a suspect’s DNA.

French authorities believed that the attack was carried out by the Popular Front for the Liberation of Palestine, which began targeting Jewish communities abroad a few years before the Copernican bombing.

Years later, Diab’s old passport was found in Italy. It shows that he traveled on it from Lebanon to Spain in September 1980 around the time of the attack. Diab was then tracked to Canada, where he taught sociology at two universities in Ottawa. He was arrested in 2008 and extradited to France in 2014.

A “message” to future terrorists

Diab has always maintained his innocence and claimed that his passport was stolen and that it was a matter of incorrect identity.

His ex-wife and several students at the University of Beirut did not testify in his favor during his extradition hearings. But once imprisoned in Paris, they testified that Diab was with them in Beirut at the time of the attack.

“Beirut University has documents showing that he graduated there and received his degree,” Apolline Cagnat, one of Diab’s French lawyers, told FRANCE 24.

In January 2018, after the case against Diab collapsed due to lack of evidence, he was allowed to return to Canada, where he is suing the country for his extradition and time in prison.

But the Board of Appeal’s decision to bring Diab to justice changes everything.

“It will not be a traditional trial. The evidence comes from another era. Therefore, we were very careful with the chances of even getting a trial, says the victims’ lawyer David Pere. “I think this decision is a message that France is sending out to yesterday’s and tomorrow’s wannabe terrorists: it will not let them go free.”

“I’m trying to get my head around this,” Adler said. “Why did the judges allow the suspect to leave the country if there is a possibility that the trial would go ahead? Will he return to France to prove his innocence? At least the court will examine the facts in full and we will finally know who is responsible or not for what happened that day. ”

Diab did not respond to FRANCE 24’s request for comment.

“He is extremely disappointed. This decision is contrary to everything we have learned about this case, says Diab’s lawyer Apolline Cagnat.

“We will take this to the highest jurisdiction to overturn this decision because our client is innocent!” Added a second defense attorney, Amélie Lefebvre. “There is several pieces of evidence to show that he is innocent.”