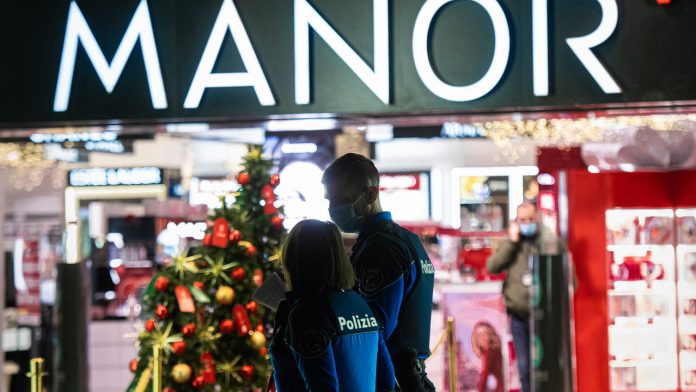 A woman arrested for a knife attack in a Swiss department store was linked to a jihadist investigation in 2017 and spent time in a psychiatric clinic, police said on Wednesday.

The 28-year-old was held on Tuesday after trying to suffocate a woman with her bare hands and stab another in the neck.

The other victim in the attack, in Lugano in southern Switzerland, is said to be seriously injured.

“The perpetrator is known to @FedpolCH,” federal police said on Twitter. “She participated in a 2017 police investigation into jihadism.”

Police discovered at the time that the woman had formed a relationship on social media with a jihadist fight in Syria.

She had tried to travel to Syria to meet the man, but was stopped by Turkish authorities at the Syrian border and sent back to Switzerland.

“The woman was suffering from mental health problems,” police said, adding that she had been admitted to a psychiatric clinic.

She had not been on the federal police radar since, the tweet said.

During Tuesday’s incident, the woman was overwhelmed by customers in the store before officers arrived.

The regional police later mentioned a possible terrorist motive behind the attack.

The Swiss federal police said that criminal proceedings are underway.

“This attack does not surprise me,” Federal Police Chief Nicoletta della Valle said on Tuesday, stressing that such attacks occurred worldwide.

Switzerland has never been hit by a major jihadist attack, but police and officials highlighted several recent incidents being investigated for possible terrorist motives.

And two Swiss citizens between the ages of 18 and 24 were arrested near Zurich on alleged links to the perpetrator of a deadly attack in the neighboring Austrian capital Vienna earlier this month.

“We are with Switzerland during these difficult hours,” he wrote.

“We will provide a common response to Islamist terrorism in Europe and defend our values.”

An Islamic State sympathizer who tried to join the jihadist group in Syria was behind the attack in Vienna, in which four people were killed and several others injured.