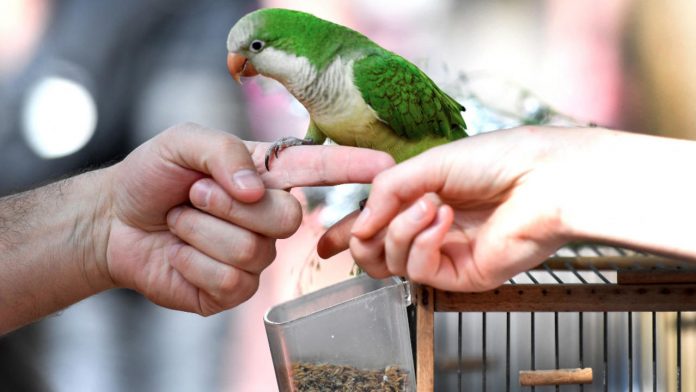 Avoid suffocating budgies on Sundays under the glassy ironworkers in Paris Île de la Cité will soon be no more. The city decided last week to close the iconic bird market every week, a stone’s throw from Notre-Dame Cathedral in the heart of the French capital, citing animal concerns and chronic irregularities.

The bird market is held alongside the island’s daily flower market on Place Louis Lépine and has also been a mainstay for generations of Parisians dating back to the 19th century. City Hall’s decision to close bird sellers comes as the adjoining market – officially the Queen Elizabeth II Flower Market since it was renamed in tribute during the British monarch’s visit in 2014 – looks forward to a € 5 million renovation from 2023 to 2025.

For some, the cacophonous stalls of birds, the sacks of seeds, cages, fish tanks and a host of other small animals exude the charm of old Paris. But for animal rights activists, the site is a nasty relic, a “remnant of another time”, and must go.

“Capturing birds is cruel and archaic,” such a group, the PAZ (Paris Animaux Zoopolis), said in a petition, drawing on the bird market, which collected more than 2,500 signatures. “It deprives them of their freedom and their most elementary behavior, to fly. In addition, the vast majority of birds sold on the Île de la Cité are exotic. They are not used to our climate and are very vulnerable to outdoor exposure (drafts),” he claimed. PAZ. It is said that the presence of the market also encourages “breeding and in some cases illegal capture” of birds.

City Hall claimed that the market, which stands across a cobblestone courtyard from police headquarters, had become a threat to illegal trade in the feathered creatures despite repeated efforts to stop it.

An investigation by the French National Office for Hunting and Wildlife (ONCFS) in 2013 led to the arrest of seven people in the market. Forty-six gold finches were seized during that operation. The birds are appreciated for the beauty of their song and sold for up to € 150 each.

“It had been known for several years that this market had become the epicenter of a racket for bird trade,” said Paris Mayor Christophe Najdovski during the debate in City Hall. “And yet, despite a number of measures taken, human trafficking continues today.”

Najdovski, whose portfolio includes animal welfare, said the birds are displayed on the market in a way that is “unacceptable given the animal welfare standards required today”. His Europe Ecologie Les Verts – the Green Party, which is allied with the Socialists of Mayor Anne Hidalgo – lobbied for the ban. The city took the opportunity to renovate the flower market to change the rules that govern the site.

Currently, 13 companies are licensed to operate in the bird market, although the city says only seven of them still sell birds. The market also attracted unregistered street vendors who would regularly start shops on the site despite a 2004 charter prohibiting them from selling birds. The city has promised to provide support to the established merchants who will be affected when the market closes.

EThis morning, PAZ responded to AFP’s questions on the #MarkOxNews🐟🦜Source sadness of revealing several hundred #prisoned animals and selling them as merchandise

Are they savvy sellers? Always present❌The sellers on the sidewalk? Toujours presents pic.twitter.com/E3eALCfY1Z

Some bird fans had brushed at the prospect of the shutdown. “These activists and ecologists describe us as poachers and talk about animal abuse, but we are enthusiasts. We take care of our birds, we love them. And we do not raise protected species!”, Issam Akrouti, head of the Cercle Ornithologique Lutétien, a bird-enthusiastic group in Paris, told the newspaper Le Parisien in January.

“Of course you should not turn off wild birds in cages, but our canaries and budgies would not survive two days if we released them into the wild,” Akrouti said daily. “This is a battle against the Parisians [a slang term referring to urban “bourgeois-bohemians”] contrary to rural life: They want to shield people from contact with animals. their cages only serve as “bedrooms” for them to use.

The closure of the bird market is the latest effort from the city of Paris and France in general to improve their animal rights record.

During the same assembly in Paris City Hall as the green light closed the bird market, the city called on the French government to ban the sale of kittens and puppies under the age of six months in pet stores from 2022. It also asked city police to stop fishing with live bait or tagged fish hooks in the French capital. waterways.

In January, France’s lower house of parliament passed a bill banning the use of wildlife in circuses across the country and banning the capture of dolphins and humpback whales in marine parks. While legislators discussed this legislation, the Parc Astérix, an amusement park northeast of Paris, announced that it was closing its 32-year-old dolphin aquarium and sending its eight animals elsewhere in Europe, leaving only two marine parks with such creatures in France. The new legislation also aims to ban the breeding of minks for fur and strengthen the rules for the sale of pets and the penalties for animal abuse.

The city of Paris had already decided to stop authorizing circuses that include entertainment with live animals from 2020.

Meanwhile, the fight for Paris Animaux Zoopolis continues. The group’s active campaigns include lobbying for a France-wide ban on live bait fishing. It also wants fishing to be completely banned in Paris, “in order to avoid causing great suffering and anguish to many fish for no reason”. PAZ claims that because it is not allowed to consume the fish caught from the city’s polluted waterways, fishing allows the creatures to be cruelly treated as toys.