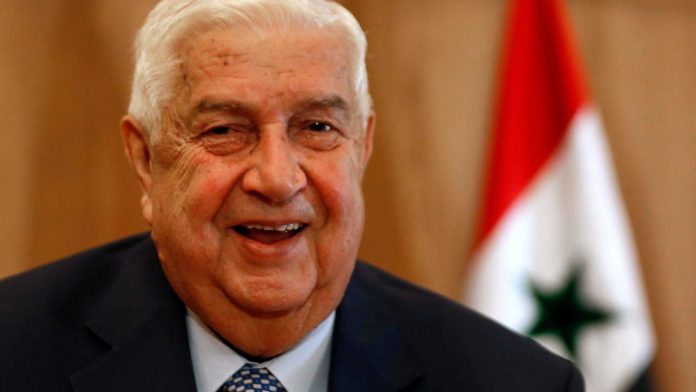 Syrian Foreign Minister Walid Muallem, a staunch supporter of Bashar al-Assad’s regime who has held his job through a decade of conflict and several changes, died Monday at the age of 79.

The veteran diplomat was hit by US and European sanctions early in the conflict that has torn Syria apart since 2011 and was known for his tirades, claiming the war was the result of a Western conspiracy.

Muallem, who has been Foreign Minister since 2006, began his career in the diplomatic service in 1964. In 2012, he also became Deputy Prime Minister.

The government announcement did not specify the cause of his death, but his health was considered to have deteriorated for some time.

His most recent public appearance was at the end of last week in Damascus at the opening of a conference on the return of refugees. He looked weak and was helped by two men in the hall.

At the same conference, which was stumbled upon by most international humanitarian actors, foreign participants and Assad participated via video link.

Muallem was wearing a surgical mask and appeared to have lost weight.

In 2014, he underwent heart surgery in Beirut.

The late minister addressed US sanctions as early as August 2011, less than six months after the outbreak of protests calling for regime change – demonstrations brutally suppressed by the Syrian authorities.

Muallem has “continued to beat this drum of international conspiracy and has sought to disguise the regime’s horrific activities by claiming that terrorists or others were responsible,” Washington said at the time.

Muallem was one of the most famous figures in a Syrian government that remains highly isolated internationally despite recent efforts to normalize ties with the Gulf countries.

His funeral was held on Monday afternoon in the presence of a host of officials including Deputy Foreign Minister Faisal al-Meqdad.

Russia, long a close ally of the regime and the leading foreign broker in Damascus since its war-changing military intervention in 2015, was the first nation to pay tribute to Muallem.

“We have lost a very reliable partner and sincere friend,” said Bogdanov, who was previously stationed in Damascus. He emphasized that he had been in “almost constant contact” with Muallem for the 35 years he had known him.

Nearby Lebanon, which says it is worth 1.5 million Syrian refugees, and Oman also sent its condolences.

Muallem, a Sunni Muslim from Damascus, never allowed any daylight between his statements and the official stance of Bashar al-Assad, who comes from the ruling Alawite minority.

Muallem had replaced Faruq al-Shara, a Sunni colleague who was foreign minister for more than two decades and came from the Daraa government, which is considered the birthplace of the revolt that broke out against the regime almost ten years ago.

Shara, the vice president when the protests began, was the only senior regime official who advocated a political compromise as a way to end the civil war. He was then removed from the Ba’ath party leadership and completely renounced political life.

For more than half a century in the foreign service, the incredibly loyal Muallem held positions in Tanzania, Saudi Arabia, Spain and Great Britain, among others.

He was appointed ambassador to Romania in 1975, five years after Bashar al-Assad’s father Hafez came to power.

Muallem was Syria’s envoy to Washington throughout the 1990s and also played a key role in Damascus’ peace talks with Israel during the same period.

He was the father of three children.